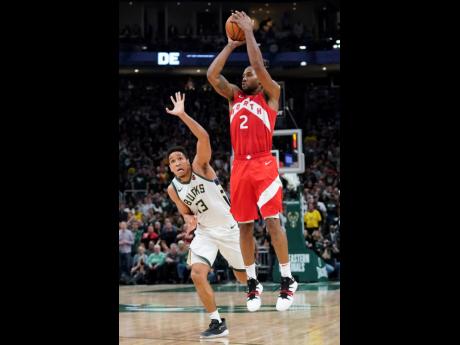 AP
Toronto Raptors’ Kawhi Leonard (right) shoots in front of Milwaukee Bucks’ Malcolm Brogdon during the second half of Game 5 of the NBA Eastern Conference basketball play-off finals on Thursday, May 23, 2019, in Milwaukee. The Raptors won 105-99 to take a 3-2 lead in the series.

Kawhi Leonard arrived in Toronto thinking he could pick up another championship to go with the one he already has.One more victory and he’ll play for another ring. And dominant performances like he put up Thursday night are a big reason why.Leonard scored 35 points and the Raptors beat the Milwaukee Bucks 105-99 to take a 3-2 lead in the Eastern Conference finals.“I’m not afraid of the moment,” Leonard said.

“This is what I work out for in the summer. I’m just trying to win. It’s a matter of me being aggressive and don’t shy away from anything.”Leonard was the NBA Finals MVP when San Antonio won the championship in 2014.

And he’s capping off his first season in Toronto after requesting a trade from the Spurs with quite a play-off run.It includes the first buzzer-beater to win a Game 7 – a shot that took four bounces off the rim to knock out Philadelphia in the conference semi-finals. And he has continued to dominate in the conference finals.

Leonard showed no obvious signs of the leg soreness that bothered him in Toronto’s victories in the previous two games, hitting the 30-point mark for the fourth time in the series. He had a career-high nine assists, made five three-pointers, and grabbed seven rebounds.

Fred VanVleet, whose son was born Monday, scored 21 points, hitting seven threes . Kyle Lowry added 17 as the Raptors put themselves in position to advance to the NBA Finals for the first time. A victory at home today would set up a match-up with two-time defending champions Golden State.Giannis Antetokounmpo had 24 points for Milwaukee hours after being announced as a unanimous first-team, All-NBA selection.“We’re not going to fold,” he said. “Come on, man. Best team in the league, man. We’re not going to fold. We’re going to go in and give it everything we’ve got. We can’t fold. We’re going to come back to Milwaukee being [ticked].”Eric Bledsoe scored 20 and Malcolm Brogdon added 18 points and 11 rebounds in his return to the starting line-up.