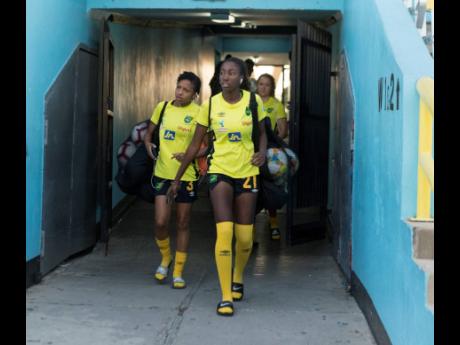 Gladstone Taylor
Olufolasade Adamolekun (right) and Chanel Hudson-Marks arrive at the National Stadium on Monday, May 13, 2019 for a training session ahead of the team’s recent international friendly against Panama on May 19, 2019. Adamolekun scored on Thursday in Jamaica’s 2-1 win over FC Surge in a friendly in South Florida. 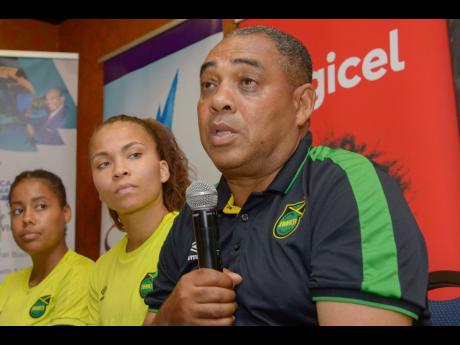 Shorn Hector
Reggae Girlz coach, Hue Menzies (right) responds to questions from the media during a Jamaica Football Federation (JFF) press conference at the Jamaica Pegasus hotel on Wednesday May 15, 2019.
1
2

Reggae Girlz head coach Hue Menzies was pleased that the makeshift team that he put out against Miami-based outfit, FC Surge, in a friendly game in Miami on Thursday had the mentality to get a positive result despite not having a good game.

Menzies said coming off the back of a tough Panama game on Sunday, he wanted to rest some players and give some others a look-in. However, he noted that the conditions in South Florida were also less than ideal and as a precaution they limited the playing time of some players.

“This was a break from the Panama game. We rested some players who would have played 90 minutes and players with minor injuries. They could have played but we just felt like to rest them. So we started with a makeshift line-up and they (FC Surge) got to score a goal on us early,” he related.

The game which lasted just an hour (30-minute halves) saw the Jamaicans making some adjustments in the second-half and forcing their opponents on the back foot before replying with goals from Olufolasade Adamolekun and Tiffany Cameron late in the second half to steal the victory.

“We were concerned about the timing of the event, it (event) not starting on time and we were concerned about playing Scotland too close and having to travel there, so we limited the time for some of the players. But the second half we made some changes to the line-up and we still had more than the other team did, then in the last 10 minutes we came in and scored a couple goals to win the game.

“But eventually you got to put those (bench) players in situations where they can be evaluated and be updated and they got the result, even though we didn’t play as well as we wanted to, we created a lot of chances for ourselves but at the end of the day, we got the result and it’s good to know a team is not at their best and can still get a positive result,” Menzies reasoned.

He added that midfielder, Gisselle Washington, who will miss the FIFA Women’s World Cup through injury, is a player he will miss but he believes they will be competitive in the event no matter who they play.

“The team will show some depth and versatility in terms of positions. We should be very competitive. We evaluated close to 50 players and we believe we picked the top 23 and a lot of these players are very familiar with some of these players that we will play against from clubs and leagues, so it’s more of a respect (for them) than fear,” he said.