JFF must do better! – coach - Player, coaches livid about travel arrangements made by federation 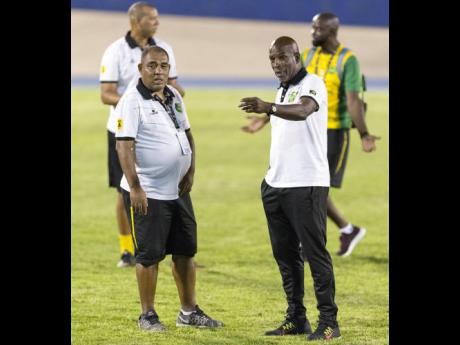 Assistant coach for Jamaica’s national senior women’s football team Lorne Donaldson has hit out at the Jamaica Football Federation (JFF) for its management of the flight arrangements for the Reggae Girlz and their support staff for their final FIFA Women’s World Cup warm-up game against Scotland in Glasgow on Tuesday.

The Reggae Girlz, who are set to make their debut at the June 7 to July 7 tournament, spent the last few days in Miramar, Florida, where they staged a training camp and played a friendly against local team FC Surge.

They are to continue their preparation against Scotland, but their travel itinerary, which, according to the coach, was presented at the last minute, will put a significant strain on the team and has even resulted in some players having to be left behind due to documentation issues.

This is the latest in a series of incidents that have brought the JFF’s competence and its management of the Reggae Girlz into question and follows a recently settled contract dispute, which lasted several months.

Donaldson told The Sunday Gleaner in an interview prior to departing Miami for New York and then on to Glasgow along with head coach Hugh Menzies and several of the players that the situation has left players and coaches alike upset and argued that the JFF could have done a lot better with their flight arrangements because they had more than enough time to make proper plans.

“I don’t think there were any proper flight arrangements because yesterday (Friday) when we were leaving the hotel, most of us didn’t even know what flight we were going on,” said Donaldson.

“But when we were at the airport, we found that some of the girls didn’t have a visa to fly to Amsterdam because at the first point of entry, you have to a have a visa to enter Europe, and the visa that they have is to enter London,” Donaldson explained, noting that prolific striker Khadijah ‘Bunny’ Shaw, captain Konya Plymmer, and Jody Brown were the players who were forced to stay behind.

“We had to buy tickets at the counter for these players that were left and reorganise their flights and, obviously, that didn’t happen in time because they are still at the hotel with us right now and will be flying out today (yesterday),” Donaldson said.

He stated that another group of players flew to Morocco yesterday morning through London Heathrow, after which they would then take a bus to Gatwick before boarding another bus to Glasgow for a seven-hour drive spanning 700 kilometres.

“We got left behind because we couldn’t get a flight out, and we got stuck with a bunch of the equipment and that is me and Hugh Menzies,” Donaldson further shared.

“I think it is a big waste of money with the way we do business, and there is a lot of uncertainty among the players, and they are very unhappy about this stuff because we wanted to fly as a group,” said Donaldson, while adding that the Reggae Girlz would have little rest time before their game against Scotland.

“We have a game against Scotland, and we don’t know how we are going to manage that with some of the players getting in so late,” Donaldson stated.

When contacted yesterday, JFF’s general secretary, Dalton Wint, said he could not comment on the matter because he was yet to be briefed on the situation.