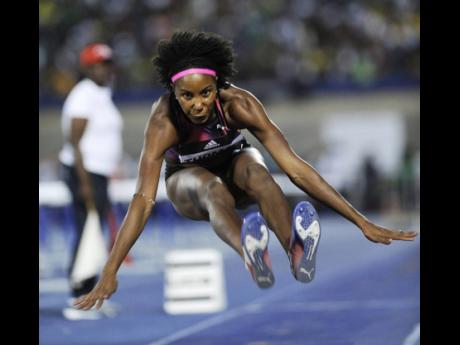 Coach Kerry-Lee Ricketts thinks his wife Shanieka can be on the podium when the triple jump competition ends at the World Championships later this season.

The key is a technical improvement that could get her past 15 metres. The coach believes that anyone who gets over that distance is safe.

Twice a World Championships finalist, jumper Ricketts is among the best on the planet, but coach Ricketts sees medals in her future.

“This year, to be honest, we really want to go to World Champs and be on the podium like everybody else,” Ricketts said. “We set ourselves a particular mark, and I think once we achieve that mark, we should be on the podium.”

The target for elite triple jumpers is 15 metres, and no one has gone that far since Columbia’s Olympic champion Caterine Ibarguen bounced 15.17m in 2016.

“I don’t want to say the mark, but it’s 15-something,” he demurred. “Once we go there, I think we should be on the podium, so when we break the jump down, where she needs to be in terms of her first two phases, she’s there now, so the only thing we need to work on is, basically, the last phase, and the last phase will bring us there.”

The Jamaican record is held by 2005 World Champion Trecia-Kaye Smith at 15.16 metres.

Shanieka Thomas has a fine competitive record with wins at Champs for Vere at the NCAA Championships for San Diego State University and twice at the NACAC Championships for Jamaica. In addition, she was second to compatriot Kimberly Williams at the Commonwealth Games last year and has twice reached the World final.

An early season personal best of 14.76 metres surpassed the World Championships qualifying mark and has allowed coach and athlete to focus on technical work.

“We’re finding out where may be weak so that she can actually execute that last phase properly, so we’re just, basically, working on that with drills and strength work,” said Ricketts.

The coach has the greatest respect for the consistent Williams and sees her and his wife as favourites for next month’s National Senior Championships.

“It’s just her and Kimberly who’s, basically, out there, so if she doesn’t have a good day, she still will be in the top two and still qualify,” he said.

Williams, the 2014 and 2018 Commonwealth champion, hasn’t opened her season yet but has jumped beyond the World qualifying mark of 14.20 metres each year since 2010.