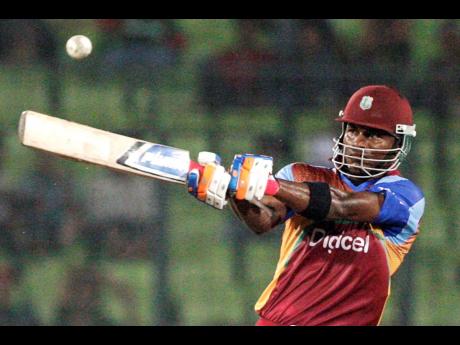 The 38-year-old Samuels, a veteran of 207 One-Day Internationals, was a notable omission when the Robert Haynes-led selection panel announced their 15-man squad for the May 30 to July 14 showpiece last month.

“Marlon Samuels is a surprise. I think Marlon Samuels was there with the team throughout the playoffs (World Cup qualifiers) and in a series after the team had qualified, so him being left out was a surprise to me,” Bravo said recently.

“They should have picked him. Marlon should have been in the squad. Being there throughout the playoffs, being an experienced guy in the middle – he should be there.

“Whether or not they start him [in the final XI], but I think he has done enough to be in the 15-man squad to go to England. It would have been his last World Cup.”

Samuels helped West Indies secure their World Cup berth last March in Zimbabwe, scoring 231 runs at an average of 33 as the Caribbean side reached the finals of the qualifying tournament.

However, he struggled on tours of India and Bangladesh later that year, averaging just 16 in eight matches with a highest score of 26, and was not part of the squad, which drew 2-2 in a five-match series with England in the Caribbean earlier this year.

Overall, he has nearly 6,000 ODI runs at an average of 32 with 10 hundreds and has long been regarded as a match-winner, especially in tournament finals.

Bravo said only injury could have kept Samuels out of the World Cup side.

“I don’t know what was the thinking of the selectors obviously with guys like (Shimron) Hetmyer and Shai Hope in the side. Maybe he (Samuels) is not fit, I don’t know. Maybe something is wrong with him, who knows.” Bravo mused.

NO ROOM FOR POWELL

West Indies retained the core of the squad from the England series, which meant that there was also no room for all-rounder Rovman Powell, who captained the side on the tour of Bangladesh last December when Jason Holder was ruled out through injury.

Powell, too, was part of the West Indies qualifying campaign, averaging 44 and hitting his maiden ODI hundred – 101 – against Ireland.

“Rovman Powell, who had a good qualifying campaign, also missed out. He was the captain in the Bangladesh series and then now totally out of the team,” he pointed out.

Bravo was named on the reserve list for the World Cup but said that there was no discontentment with not being included in the final squad.

“I won’t say I’m disappointed because I haven’t played for West Indies in over four years, especially in 50-over cricket, and when the opportunity came up and there was a slight chance of me being there in the World Cup, I had a chat with the captain, Jason Holder, and let him know I could be available if the opportunity is there,” Bravo said.

“He said as much as he would love to have me in the set-up, it would be unfair to the other guys who were there, which I accept also because again, I haven’t played for four years and was already retired.”

West Indies are in England preparing for the World Cup where they face Pakistan in their opening match at Trent Bridge in Nottingham on Friday.