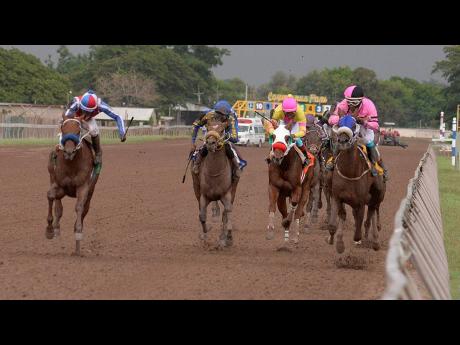 Lionel Rookwood
Supreme Soul (left) with Shane Ellis aboard comes from behind to win The 79th running of the Governor’s Cup over 200 metres at Caymanas Park yesterday.

In receipt of 16lb from SUPREME SOUL in the Governor’s Cup, benefitting from conditions that especially penalise classic winners, SENTIENT ran a brave race, tackling EARN YOUR STRIPES on the lead entering the backstretch and stayed on strongly against the rail when challenged in the straight.

However, SUPREME SOUL, who was kept off the fray by Shane Ellis while stablemate EARN YOUR STRIPES disputed the lead with SENTIENT, lengthened his strides inside the last furlong to overpower SENTIENT, trying to steal home under leading rider, apprentice Christopher Mamdeen.

SUPREME SOUL won the 10-furlong Governor’s Cup, trainer Anthony Nunes’ fourth title, in 2:08.2, confirming himself as a Triple Crown favourite ahead of next month’s Jamaica Derby and July’s St Leger, 12 and 10 furlongs, respectively, classics in which the likes of SENTIENT will return to 126lb.

SUPREME SOUL handed Ellis a two-timer, denying Subratie and Mamdeen separate three-timers on the 10-race card. Ellis had earlier opened the programme aboard 1-5 favourite, MISTRIAL, at five furlongs round.

Mamdeen moved to 41 wins, booting home NUCLEAR EVITA and ANOTHER VIGOROUS to go six clear of fellow apprentice Reyan Lewis, who, along with third-place, Omar Walker, remained on 35 and 31 winners, respectively, both going winless on the card.

Subratie posted back-to-back winners, NUCLEAR EVITA and ALI in the second and third races, respectively, before second-place finishes with HILLY’S HALO, who lost to ANOTHER VIGOROUS in the fifth, followed by brave SENTIENT in the feature.

Champion jockey Anthony Thomas rode two winners, ALI in the third and CLEARLY OURS in the seventh, maintaining fourth position on 25 wins in the riders’ standings.