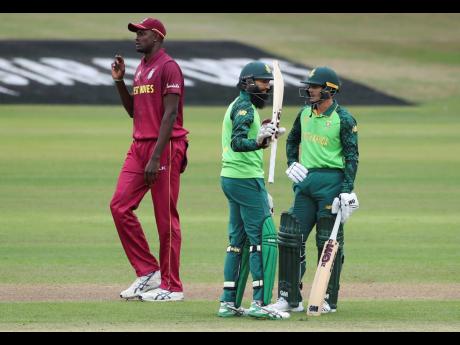 The Windies’ preparations for the upcoming ICC World Cup were foiled by ­inclement weather with their first official warm-up game against South Africa being abandoned here yesterday due to heavy showers.

The Windies were hoping to use the match as practice with their opening match of the World Cup against Pakistan just five days away.

However, despite the match being restarted after a lengthy delay, the rains came again, forcing the match to end in a no-result.

South Africa had progressed nicely to 60 ­without loss in the tenth over when the first set of showers came.

Hamish Amla scored an unbeaten half-century before the rains came

Two more attempts were also made, but both were short-lived as showers forced the players to seek shelter with the Proteas 95 without loss in 12.4 overs.

Openers Hashim Amla, who was unbeaten on 51, and Quinton de Kock, who scored 37 not out, were the batsmen at the crease.

It was tough going for the Windies’ bowlers up to that point, with captain Jason Holder’s five overs for 29 runs being the most economical of the five used.

The Windies will play their final official warm-up game against New Zealand at Bristol tomorrow.