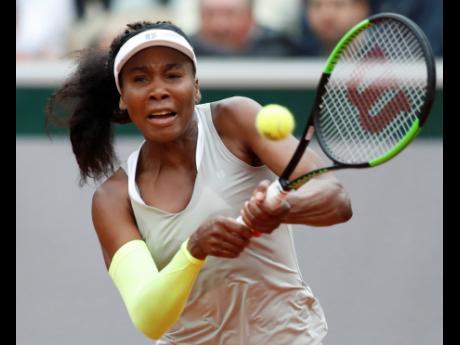 Pavel Golovkin
Venus Williams plays a return to Elina Svitolina during their first-round match of the French Open tennis tournament at the Roland Garros stadium in Paris yesterday.

Venus Williams’ 22nd appearance at the French Open did not last long.

The 2002 runner-up lost her opening match at Roland Garros for the second year in a row, beaten 6-3, 6-3 by ninth-seeded Elina Svitolina in one hour, 13 minutes yesterday.

The 38-year-old Williams lost in the first round for the fourth time in the last seven years at the clay-court Grand Slam tournament.

Williams was broken in seven of her nine service games.

Angelique Kerber is also out of the competition and will not complete a career Grand Slam this year.

The three-time Grand Slam winner lost in the first round yesterday, beaten 6-4, 6-2 by Anastasia Potapova on Court Philippe Chatrier.

Kerber’s preparations for Roland Garros, where she never advanced past the quarter-finals, were hampered by a right-ankle injury she suffered at the Madrid Open.

The 81st-ranked Potapova sealed the opening set with a cross-court backhand winner and broke twice at the start of the second. Kerber saved two match points before shanking a forehand wide, sealing her fate.

Playing his first match at Roland Garros since 2015, Roger Federer had no problem getting to the second round.

Back on the refurbished Court Philippe Chatrier on the opening day, the 20-time Grand Slam ­champion defeated debutant Lorenzo Sonego 6-2, 6-4, 6-4.

Federer missed the French Open in 2016 because of a back injury and then skipped the event to focus on Wimbledon. He won the title in Paris 10 years ago to complete a career Grand Slam.

“I missed you, thanks very much for the welcome,” Federer said to the crowd after concluding his match. “I was quite tense at the start.”