The next hurdle - Michael O’Hara eyes Olympics in pet event 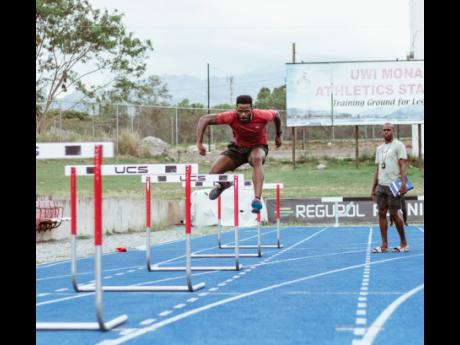 Contributed
Racers Track Club sprint hurdler Michael O’Hara being put through his drills by coach Gregory Little at their training base at The UWI Mona/Usain Bolt Track on Wednesday, April 17.

Racers athlete Michael O’Hara has decided to add the 110m hurdles event to his programme ahead of his bid to make Jamaica’s team for the Tokyo Olympic Games next year.

O’Hara, 22, has competed over the 100m and 200m sprints since joining the Glen Mills-coached Racers Track Club after high school, but his love affair with the 110m hurdles event which brought him success at the ISSA/GraceKennedy Boys and Girls’ Athletics Championships, has never left him.

In explaining the addition of the 110m to his repertoire, O’Hara said that he always had it in the back of his mind after each race.

“I decided to take it on in April after competing at the Grenada Invitational and essentially missing the hurdles event, which is really what I’m passionate about,” he said.

O’Hara also credits coach Gregory Little for giving him the added confidence to make a return to the discipline.

“I’ve been training with him since April, and my hope is to improve to a level where I can challenge for a spot in Tokyo next season,” he said. “I wake up more enthused now about training, and I’m highly motivated to give this my all and see where it takes me.”

Despite various track and field pundits concerned about the future of Jamaica’s men’s sprinting, especially after many disappointing results at various major international track and field meets in the last two years, there is, however, a consensus of hope for men’s sprint hurdling. Olympic gold medallist Omar McLeod, Olympic bronze medallist Hansle Parchment, and Commonwealth Games champion Ronald Levy are seen as Jamaica’s top three sprint hurdlers, and if O’Hara wants to qualify for Tokyo, he will have to consider these men stern competition for the three spots. But Little is optimistic about O’Hara’s quick transition to the hurdle sprints, having clocked 13.89 seconds at the All Comers Track Meet at the National Stadium on Saturday.

“It’s been just a little over a month since he’s been in hurdles training, and it feels good to know that he has learned so fast and looks so comfortable with the Olympic height,” Little said. “It’s a tough, competitive event, but Michael is used to this, and has his head in the game, which is key. There are no set plans yet for the rest of this season as we monitor how fast his times continue to improve, but the main aim is to get within the mid-13 range and make the Olympic team for next year.”

O’Hara was a star athlete for Calabar High in the ISSA/Grace Kennedy Boys and Girls’ Athletics Championships, which he left with four gold medals in 2015 and a personal best of 13.49 seconds with a headwind of -3.8 as a junior in 2015.