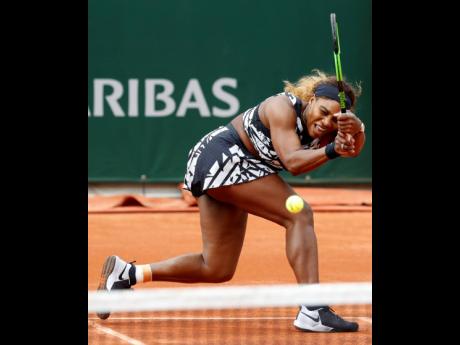 AP
Serena Williams plays a shot against Vitalia Diatchenko during their first-round match of the French Open at the Roland Garros Stadium in Paris yesterday.

This was one mistake too far for Serena Williams.

Sure, the bad backhand put her behind only 15-30 at the outset of the second set of her opening match at Roland Garros yesterday. What made the miscue so bothersome? She’d already dropped the first set against 83rd-ranked Vitalia Diatchenko — and Williams’ unforced error total already was at 15 on a windy evening.

So she reacted by throwing her head back and letting out a scream. Then she stepped to the baseline to serve and stomped her right foot. And simple as that, Williams righted herself: She won 11 of the next 13 points, and 12 of 13 games the rest of the way, to come back for a disappointing-to-dominant 2-6, 6-1, 6-0 victory at the French Open.

Williams arrived in Paris having withdrawn from each of her past two tournaments because of a balky left knee and the one before that because of illness. She had played only nine matches all season, and so her pursuit of a record-tying 24th Grand Slam title — fourth at Roland Garros — seemed no sure thing.

Williams arrived on court with a black-and-white jacket bearing words such as “champion,” ‘’queen,” ‘’goddess”, and “mother” in French.

She made her return to Slam competition in Paris a year ago after missing five majors because of the birth of her first child. Williams pulled out before the fourth round because of an injured chest muscle then was the runner-up at both Wimbledon and the US Open.

Yesterday, she did not show obvious signs of her recent knee problem in the early going. But she didn’t look up to her best, either, by any means. Her movement wasn’t ideal, and she often reached for shots instead of thumping them.

Could the nearly impossible happen? Could Williams lose in the first round of a major? She’d only done so once before in 70 Slam appearances — and that lone defeat came at the French Open in 2012.

Diatchenko sat at changeovers with a towel covering her head as if embarrassed to be seen there.