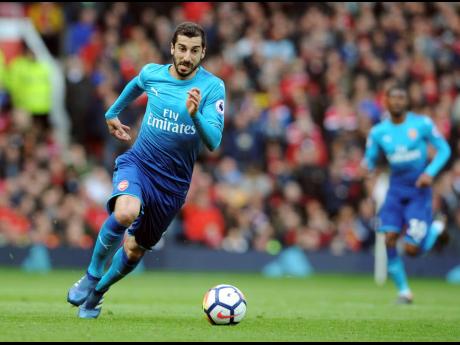 Arsenal players Granit Xhaka and Sokratis Papastathopoulos want to win the Europa League title for teammate Henrikh Mkhitaryan, who is missing the final for political reasons.Mkhitaryan is from Armenia, which has a tense relationship with neighbouring Azerbaijan.

Before Mkhitaryan said last week he wouldn’t travel – saying “it hurts me a lot” to miss the final — Arsenal had asked Azerbaijan for security guarantees for him.Azerbaijan says it gave all necessary guarantees and has accused Armenia of exploiting his case for political gain.

“Of course we’re disappointed he’s not here,” Xhaka said yesterday. “He’s very important for us, on and off the pitch, and ... we want to give him a trophy, too.”Papastathopoulos said he was playing for Mkhitaryan and others who are unable to take part.“We have also to play for him and for the players who are injured,” Papastathopoulos said. “Tomorrow (today) if we win this game, it’s also for them.”

Nagorno-Karabakh is a region of Azerbaijan which has been under the control of ethnic Armenian forces backed by Armenia since a war there ended in 1994.

Some neighbouring districts are also under the control of those forces.Mkhitaryan visited Nagorno-Karabakh in 2012 and handed out gifts to local ethnic Armenian families. Azerbaijan generally considers any travel to the region illegal unless the government in Baku authorises it.

Arsenal manager Unai Emery is looking to win a record fourth Europa League title as a coach after victories with Sevilla in 2014, 2015 and 2016.He refused to say if goalkeeper Petr Cech would start in what will be his final game before retirement. If Cech plays, he would end his career on a high note against Chelsea, where he won the Champions League and four Premier League titles.

Cech has generally been the backup for Bernd Leno in the Premier League this season. However, he has played 10 games for Arsenal in the Europa League, while Leno has played three.“He’s a great man, a great professional,” Emery said.Emery also said he had no reason to doubt Cech’s loyalty after British broadcaster Sky Sports reported he could become Chelsea’s sporting director next season. Cech has said he will decide on his future after the final.“I think he deserves it, to trust in him,” Emery said. “How can we not believe in him?”