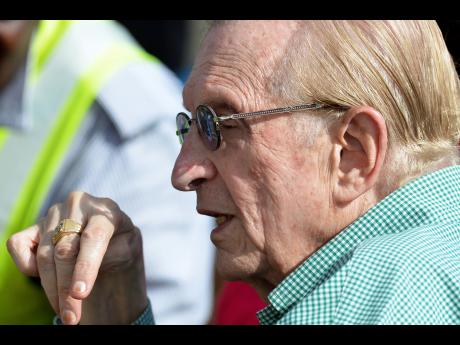 He is best known as the fifth prime minister of Jamaica, serving from 1980 to 1989, but Edward Philip George Seaga was much more than that.

His light shone in many different areas of national life. His influence on post-Independence Jamaica spread far and wide, and sports was one of the areas which benefited from his genius.

As minister of development and welfare immediately after Independence in 1962, Seaga had responsibility for sports and was thus the new nation’s first de facto minister of sport. Among his first big tasks was the hosting of the 1966 Commonwealth Games in Kingston. The National Arena, still one of the island’s main indoor sporting venues, was built during this period to host events.

Former president of the Jamaica Olympic Association, Mike Fennell, remembers the period well and credits Seaga for a then groundbreaking move.

“It was under his regime that an attempt was first made by Government to employ professional coaches. I recall that Olympian Herb McKenley was among the first to be brought back to assist with coaching in athletics. There were coaches in other sports as well, but this is the one I remember clearly,” Fennell told The Gleaner.

Fennell said Seaga was one who always recognised and understood the importance of sports in nation building, revealing that he was the first Jamaican prime minister to attend an Olympic Games when he went to Los Angeles in 1984. As an institution builder, Seaga developed the concept of youth centres, which provided cultural and athletic facilities islandwide.

When he became member of parliament for West Kingston in 1960, Seaga immediately saw that community development and sport were two sides of the same coin. In addition to providing the social infrastructure for the new Tivoli Gardens community, Seaga insisted that the youth get involved in some type of sporting activity.

He led from the front. Seaga became president of the Tivoli Gardens football, netball and basketball clubs.

His name is not now mentioned at any level of cricket, but this most West Indian of games was the former Jamaica Labour Party leader’s first love.

While a schoolboy at Wolmer’s in the 1940s, Seaga was a more-than-useful wicketkeeper/batsman. He had as his mentors two great West Indies wicketkeepers, Gerry Alexander and Jackie Hendriks.

In an interview with The Gleaner 12 years ago, Seaga said he was a gutsy batsman.

“I liked to face the pace bowlers. I liked to open the innings,” he said, suggesting that he was fearless at a time when batsmen did not wear helmets. His cricket career was, however, put on hold when he left Wolmer’s to attend Harvard University in the United States. He joined the Kingston Cricket Club when he returned home but failed to break into the senior team.

In addition to cricket, Seaga played field hockey, tennis, and football and was a member of the Jamaica Skeet Club.

Perhaps Seaga’s greatest contribution to local sport came in the twilight of his life. He played a pivotal role in the transformation of Jamaica’s football from a mostly amateur set-up to a professional league in the period following the national men’s team’s historic qualification for the 1998 FIFA World Cup in France.

As a popular retired political leader with close ties to the business community, Seaga headed the Premier League Clubs Association (PLCA) and the Professional Football Association of Jamaica (PFAJ), which facilitated the transformation under the late Jamaica Football Federation president, Captain Horace Burrell.

The PLCA was particularly important. It is responsible for marketing and securing sponsorship for the 12-team league, and the well-honed negotiating skills of Seaga proved crucial in the talks for corporate sponsorship, which is now led by Red Stripe.

Seaga passed away in a Miami hospital yesterday after a lengthy period of illness. He was 89 years old.