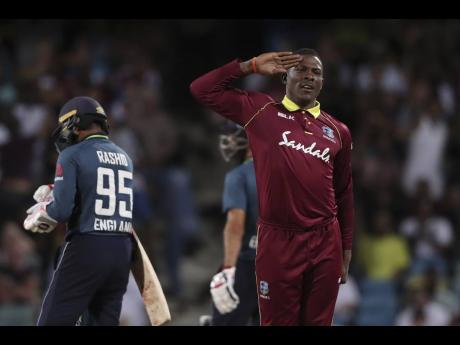 The prospect of representing the West Indies in his first-ever World Cup has been giving Sheldon Cottrell “sleepless nights”, the left-arm pacer has admitted.

Cottrell said that turning out in the May 30 to July 14 showpiece was the fulfilment of a childhood dream and that he was fully ­prepared for the opportunity to compete on the world stage.

“My preparation personally, has been going well. It’s a ­gradual build-up for me for the World Cup,” said the 29-year-old, who has played 14 One-Day Internationals (ODIs).

“I’m looking forward to the first game. I’m having sleepless nights already, but that’s just anxiety on my side. I am ready, and the team preparation [has been excellent].”

Cottrell has had a stuttering ODI career ever since his debut four years ago. His first two appearances came on a five-match tour of South Africa just months before the start of the 2015 World Cup in Australia and New Zealand.

However, he never played again until two years later on the tour of New Zealand. He was selected for the World Cup qualifying campaign in Zimbabwe last March but managed a single match and played only one other ODI last year.

His selection for the World Cup was somewhat fortuitous. A late addition to the West Indies squad as an injury replacement for the five-match series against England in the Caribbean earlier this year, Cottrell made an immediate impact in his first outing, snatching a maiden five-wicket haul to hand the hosts a pivotal victory in the second ODI in Bridgetown.

His overall performance in the series booked his spot to the World Cup, joining the likes of captain Jason Holder, Shannon Gabriel, Oshane Thomas, Andre Russell, Carlos Brathwaite and Kemar Roach in the pace attack.

“For any young aspiring cricketers, the World Cup would be a dream for them, and it was for me,” the Jamaican said of his selection.

“Growing up in Jamaica, I couldn’t foresee this coming, so being selected [was a dream for me]. I got no handouts, I’ve done well, I’ve been rewarded, so it’s just for me to continue my hard work.”

One of the least experienced players in the squad, Cottrell said it was important that he learnt as much as possible from his more seasoned teammates in coming weeks.

The West Indies open their World Cup campaign against Pakistan at Trent Bridge in Nottingham on Friday.