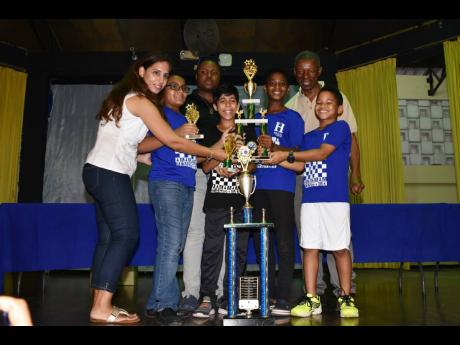 Hillel Prep School dominated the 20th staging of the Scholastic Team Chess Tournament held at the University of Technology on Monday and Tuesday.

Hillel also won the Under 8 section for the fifth consecutive year, with Hopefield Prep 'A' team in second place, and St Theresa Prep in third position.

Coach of the Hillel Team, Geoffrey Byfield is proud of the achievement.

“We are absolutely elated that we won both championships," he said. "It was a very competitive tournament, and we congratulate St Catherine Primary, who gave us a strong challenge.”

Similar to the Chess Olympiad, where national teams vie for supremacy, the team element of the local school competition adds camaraderie to this most individual of sports.

In the primary/prep Open section, Hillel’s 'A' team of Kishan Clarke (Board One), Krish Khemlani, (Board Two) and Aiden Rampair (Board Three), with Cameron Coe as reserve, had to retain their composure as the championship was still undecided going into the must-win sixth round. When the dust settled, Hillel’s A team shone brightly.

“This tournament gets bigger and more competitive each year," tournament organiser, National Master Adrian Palmer said. "This is our 20th year that we have contributed to the development of young minds through this competition.”