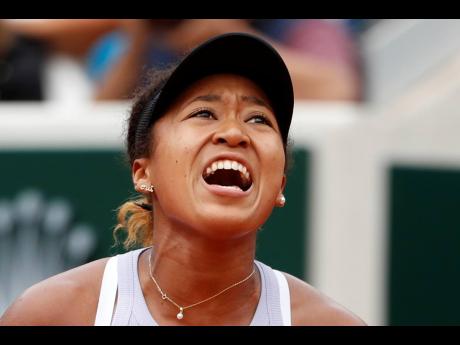 AP
Japan’s Naomi Osaka screams after scoring a point against Victoria Azarenka of Belarus during their second-round match of the French Open tennis tournament at the Roland Garros stadium in Paris yesterday.

Naomi Osaka is grinding her way through the French Open the hard way.

To cling to her quest for a third consecutive Grand Slam title, the top-ranked Osaka again had to rally from first-set woes to beat former No. 1 Victoria Azarenka 4-6, 7-5, 6-3 yesterday in the second round.

Osaka considered herself unfortunate to be drawn against Azarenka, and the powerful, accurate tennis produced by the 29-year-old Belarusian playing in her 12th French Open showed why.

Although now ranked No. 43 and without a major title since winning the Australian Open in 2012 and 2013, Azarenka took a 4-0 lead on Court Suzanne Lenglen and kept Osaka under constant pressure.

“I got rolled,” Osaka said. “She kind of killed me in the first set.”

Broken by a backhand volley at the net from Azarenka in the fifth game of the second set, the US Open and Australian Open champion from Japan seemed to be in deep trouble. But, as she did against first-round opponent Anna Karolina Schmiedlova, Osaka again proved her resilience.

“I didn’t stop trying at all,” Osaka said. “Every point was kind of, like, pedal to the metal.”

The eighth game of the ­second set was pivotal. After saving two break points, Azarenka ­doubled-faulted. Osaka leveled at 4-4, and the momentum started to shift. It was the seventh break point Azarenka had faced in the set and the first she had failed to save.

The third set was packed with drama, too, with Osaka finally taming Azarenka with her third match point when her combative opponent hit long.

Azarenka, still working her way back into the upper echelons of the game after injuries, a pregnancy and a custody battle over her child, said she would learn from the defeat.

Williams will play Sofia Kenin, an American ranked No. 35, in the third round. The 23-time major champion defeated Japanese qualifier Kurumi Nara 6-3, 6-2 to advance.

Djokovic notched up another career milestone: His young son, Stefan, watched him play, and win, at Roland Garros for the first time. The top-ranked player bidding to win his fourth consecutive major beat 104th-ranked Henri Laaksonen 6-1, 6-4, 6-3.