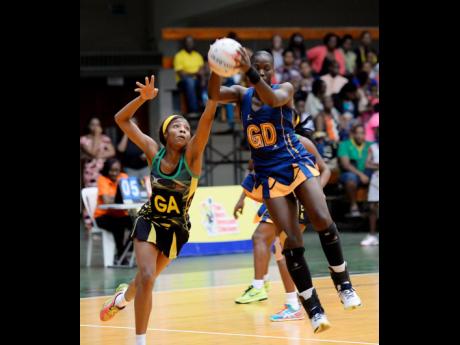 File
Jamaica goal attack Rebekah Robinson (left) tackles Barbados goal defence Rhe-Ann Niles for possession of the ball during the first quarter of their three-Test series at the National Arena on Monday, May 22, 2017.

The 20-year-old Nelson, who plays for the Collingwood Magpies in Suncorp Super Netball in Australia, was forced to withdraw from the Sunshine Girls squad due to persistent knee problems.

Dr Paula Daley-Morris, president of Netball Jamaica, said the selection committee went through the process thoroughly before selecting Robinson, who was initially named among the three reserves for the tournament.

“I congratulate Rebekah. I believe that any player who would have replaced Shimona would have kept our strength in place, and so I am looking forward to great things from the Sunshine Girls,” said Daley-Morris.

“She was in the Commonwealth Games team last year, but she didn’t get a chance to play because she got injured during the tournament, and so this is a good opportunity for her to show what she can do,” she said.

Robinson will be the backup to fellow goal attack Shanice Beckford, who has been the Sunshine Girls’ starting goal attack for the past six years.

Daley-Morris noted that 24-year-old Robinson, who represents the St Ann Orchids in the Berger Elite League competition, is a very skilful player, and she is confident that she will do well at the championships.

“She is a goal attack and a very accurate shooter. She shoots from long range and will add to what we get from our other goal attack, Shanice Beckford, and so her pick is complementary to the team,” said Daley-Morris.

“This is her first World Championships, and so I am sure that she is looking forward to making her debut, and she is going to make a mark on the championships,” she said.

The Jamaicans have been drawn in Group C of the championships alongside Trinidad and Tobago, South Africa and Fiji, who they will play in their opening game against on July.