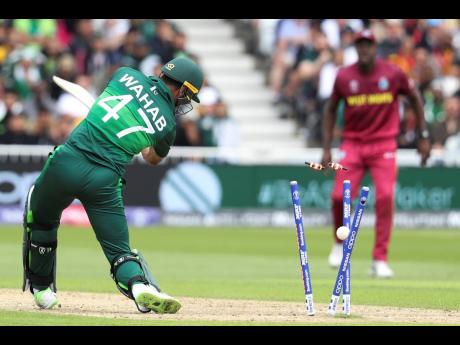 NOTTINGHAM, England (CMC): Windies fast bowlers unleashed a hostile pace salvo to stun a shell-shocked Pakistan before Chris Gayle’s 33-ball 50 inflicted further misery, as the Caribbean side made a winning start to their World Cup campaign with dominant seven-wicket win here this morning.

Opting to bowl first on a fresh pitch under overcast skies at Trent Bridge, the Windies needed just under two hours to bundle Pakistan out for a dismal 105 off 21.4 overs – their second lowest-ever score in World Cup history.

Rookie fast bowler Oshane Thomas, in only his 10th One-Day International (ODI), grabbed four for 27 in a Man-of-the-Match performance while captain Jason Holder picked up three for 42 and Andre Russell, two for four.

Fakhar Zaman and Babar Azam, both of whom made 22, were two of just four players to reach double figures, as the Windies struck at regular intervals leaving Pakistan unable to arrest the carnage.

In reply, veteran opener Gayle struck exactly 50 to set the tone while fellow left-hander Nicholas Pooran hit a breezy 19-ball unbeaten 34 as the Windies reached their target in the 14th over, to notch their first points of the tournament.

Gayle belted six fours and three sixes, posting 36 off 27 balls for the first wicket with Shai Hope (11) and a further 31 for the third wicket with Pooran.

His first two boundaries were streaky shots to third man off pacer Hassan Ali in the second over but there was no lack of conviction when he clubbed back-to-back leg side sixes in the bowler’s next over.

He lost Hope in the fifth over caught at mid-off attempting to loft seamer Mohammad Amir (3-26) over the top and then watched as the out-of-form Darren Bravo nicked one to Babar Azam at second slip in the seventh over without scoring.

Gayle reached his 53rd ODI half-century in the 11th over before holing out a few balls later, skying Amir to point with the Windies already in sight of victory at 77 for three.