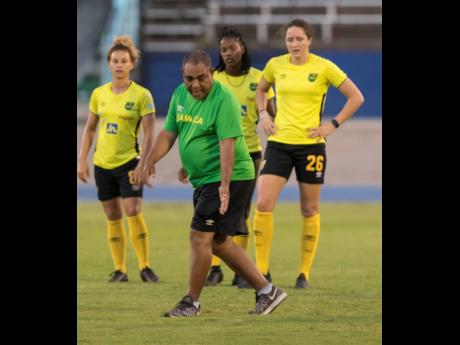 Jamaica’s senior women’s team is scheduled to stage its first training session in Lyon, France, today after arriving in the country from England yesterday. The Reggae Girlz are continuing their preparation for their opening match against Brazil in Group C of the FIFA Women’s World Cup tournament.

The Reggae Girlz, who will be making their debut at the tournament, will take on the Brazilians on June 9 before facing Italy on June 14. They will play their final group game against Australia on June 18.

Reggae Girlz head coach Hugh Menzies told The Gleaner in an interview moments after the team arrived in Lyon that the players are itching to get back on to the field after two days of rest following their 3-2 defeat to hosts Scotland on Tuesday.

Menzies added that they are very upbeat ahead of their opening encounter against the Brazilians because the Girlz are fully focused on the task ahead. However, he stressed that the team would have to maintain its discipline throughout the game to ensure a positive result.

“We have had films already being sorted out so we can see where we can exploit and just study their style,” he said.

“It does give us hope that they haven’t won a game in a long time, but we have go in there and maintain our discipline and play the way we know how to play. Then we shouldn’t have a problem.

“I think that we just have do a better job of keeping the ball and making sure that we just focus on individual assignments throughout the match in order to make sure that we come away with something from the game.”