Legality with advantage for Ahwhofah Trophy 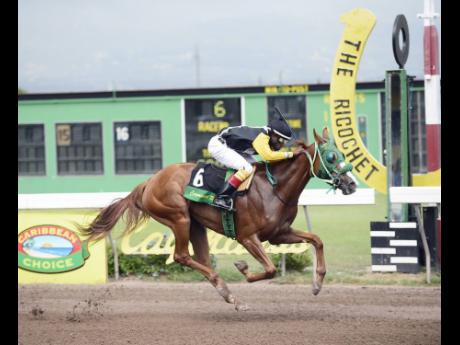 Gladstone Taylor
Zephyr, pictured here with Jerome Innis aboard, is down to compete with Legality for the Ahwhofah Sprint Trophy today at Caymanas Park in St Catherine.

PHILIP Feanny’s United States-bred LEGALITY is 12 lb lighter than he has ever been in five starts, three of which were convincing victories, interrupted only by defeat to EARN YOUR STRIPES, whom he allowed 15 lb at seven and a half furlongs in April.

Racing among older horses for the first time in this afternoon’s AHWHOFAH Sprint, three-year-old American LEGALITY would have already been among overnight allowance company were it not for a stop to gobble a spurious $1M optional claiming event, dismissing stablemate GOD OF LOVE after Anthony Nunes’ TOONA CILIATA, second in the 2000 Guineas, three weeks prior, mysteriously failed to fire.

LEGALITY is yet to win under seven furlongs, but all his performances suggests that he should have no problem overhauling this bunch at six furlongs.

At 110lb, LEGALITY has the handicaps and class in his favour, no need to worry about distance, Feanny refitting blinkers should solve that, against either out-of-form or overmatched local-breds at six furlongs.

Champion trainer Wayne DaCosta has five runners among the lot, including two-time Horse of the Year SEEKING MY DREAM, who hasn’t raced in 10 months and has simply been lounging at exercise. DaCosta’s only hope of stopping United States-bred LEGALITY from winning his fourth race from six starts should have been back-to-form LOTTERY TICKET.

However, the conditions allowing LEGALITY, a proven foreigner, to be allotted 115lb, after winning three races within the last three months, are almost laughable, Feanny rubbing salt into his rivals’ wounds by declaring the leading rider, apprentice Christopher Mamdeen, to slip five pounds.

Even if Feanny had retained Omar Walker, who was originally aboard LEGALITY on the overnight programme at 115lb, six-year-old mare LOTTERY TICKET, a run-on sprinter, would have had to perform out of her knickers at 110lb to beat the far-striding American three-year-old colt, who she now allows two pounds with Mamdeen coming in at 110 lb.

LOTTERY TICKET was twice bumped in the stretch run last time out, afterwards eased by Walker in finishing fifth behind stablemate UNCLE FRANK at seven furlongs. However, pace makes the race and early speed she lacks, going up against a lighter foreign colt, who runs similarly, but is faster.

The draw should also suit LEGALITY, out wide at post-position 15, whereas LOTTERY TICKET will have to weave her way through traffic, especially when things get bundled at the half-mile where her stablemate, MADAM SECRETARY, should be disputing the lead with the likes of ZEPHYR, PAKMAN and possibly HONEY RYDA.