Back after paying the Price 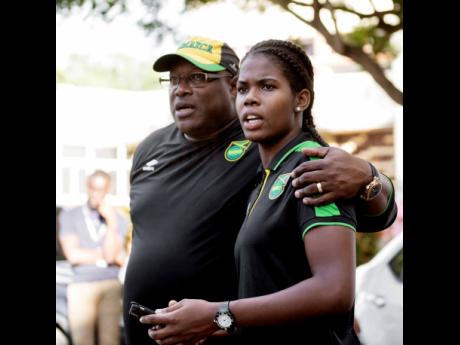 Andrew Price has been a big presence, literally and otherwise, in the coaching set-up for the Reggae Girlz, and his absence was felt.

When the big man or ‘Coach Coach’, as he is fondly called by the Girlz, met up with the party at the Heathrow Airport en route to France, the joy in the reunion was evident as one by one they stepped towards him with smiles and greeted him. It was pure love.

“It is great!” said the man, who was suspended for 10 days by the Jamaica Football Federation (JFF) for comments made in an email.

“It is as if I was not missing. I am glad to be back with the team. The Girlz are happy that I am back. I am glad we are back together,” he added.

The feeling of being part of the unit, despite physically being apart, was fostered by the Girlz constantly reaching out to him.

“It was good that the Girlz continued to reach out to me during that time. It really made me feel appreciated. When you do this type of work, you don’t get the appreciation from the people you work with, but it is good when the Girlz continued to keep in touch with me, asking me when I would be back, when will they be seeing me, and stuff like that. That really made me feel wanted, and that makes the sacrifices worth it,” Price explained.

The outpouring of love he received at the airport cemented everything he felt.

“The outpouring of love was great, just great. When I saw them at the airport, the enthusiasm with which I was received was like family reunited because that is what we are, family.

“Ever since the first Wold Cup qualifying game, we have been a family, and we will continue to be that because that is what is going to carry us through this World Cup, the family orientation that we have.

Now that he has rejoined the unit, the focus is on continuing the journey, Price said.

“What is happening is that we are continuing the train. This train started in February 2018, and we are still chugging along the train line, and we will still continue to work hard.

“Today (yesterday), the first day of training since I have been back, was great. The Girlz looked very enthusiastic. They were really into the training session, and we hope that we can really continue along the same vein for the remainder of our preparation at the Olympic Lyonnaise Stadium Complex, but it was really encouraging to be back and get the energy from the Girlz. So it is good to be back, and we are moving right along,” he added.

With the group now reunited, the entire staff is working towards the goal of making Jamaica proud, and Price will be a big part of that.