Girlz eager to get going – Menzies 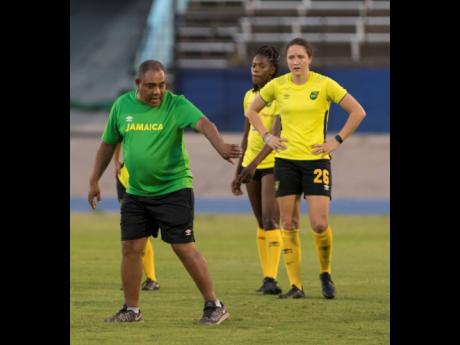 For the first time in four days, the history-making Reggae Girlz were back in their comfort zone yesterday – the football field – and for coach Hue Menzies, it was a welcome change.

Following the Girlz’ 2-3 loss to the similarly World Cup-bound Scotland on Tuesday, they travelled to London on Wednesday, where they soaked up the love, affection, and support of the diaspora before arriving in Lyon on Friday afternoon for a five-day camp.

“Today (yesterday) was a good little session. We divided them in three groups and kind of split it up and allowed the players to kind of do some dynamic stuff to get back their feet and let them get back into the swing of things,” explained Menzies of the first of two training sessions scheduled for the day at the Groupama Stadium Complex, home of the famed Olympic Lyon club, and venue of the semi-finals and finals of the upcoming FIFA Women’s World Cup.

The Girlz, all of whom, with the exception of forward Kayla McKoy, who picked up a knock in Tuesday’s game, participated fully, were in good spirits, and Menzies was happy with the way they fared.

“The response was good. Obviously, they wanted to be back on the pitch. These kids are here for a purpose. They are not here to sit around and do other things. They are here to play football,” said Menzies of the group.

But while he is eager to get them back up to speed, Menzies made it clear that time would have to be factored in for rest.

“We have to take a break in between, so we have to plan the sessions accordingly, but we do need to take a break, so on the morning of the fifth, we will probably just do a recovery session then travel up to Grenoble, which is not too far from here, so we will be fine,” Menzies said looking ahead to the team’s opening game.

The Reggae Girlz will bow into action on June 9 against Brazil in Grenoble, two days after the competition gets going. They will play their second game on June 14 in Reims against Italy before closing out their first-round fixture on June 18 against the powerful Australians in Grenoble.