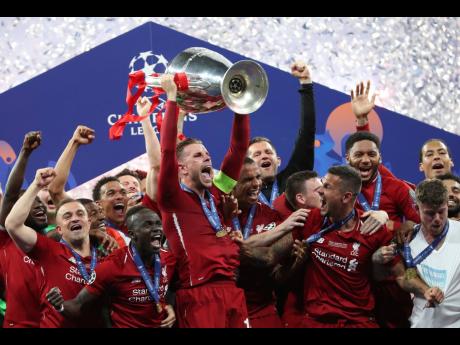 No tears of pain this time, just redemption for Mohamed Salah.

Only 108 seconds were needed to banish the Champions League final heartbreak of a year ago.

Once Salah dispatched his early penalty against Tottenham, Liverpool were on the path to a sixth European title with a 2-0 victory yesterday.

And a year after defeat in the final to Real Madrid, Juergen Klopp has his first title after four years as Liverpool manager.

A shoulder injury forced Salah out of the Kiev showpiece last year.

This time, it was Tottenham midfielder Moussa Sissoko’s arm that gifted Liverpool the early penalty opening – blocking Sadio Mane’s shot after 21 seconds – and Salah converted from the spot after a video review check.

“I have sacrificed a lot for my career,” Salah said. “To come from a village, to go to Cairo, and to be an Egyptian at this level is unbelievable for me.”

On a hot and humid night in Madrid, Tottenham came to life only in the final 20 minutes of their first European Cup final.

But Liverpool completed the job in the 87th minute thanks to one of their semi-final saviours.

Divock Origi had to accept a place back on the bench despite producing two goals while deputising for the injured Salah last month. But the substitute had the final big say in the Spanish capital, rifling a left-footed shot inside the far post.

After two losing finals since triumphing in 2005, Liverpool finally rose to third in the all-time list of European champions behind 13-time winner Real Madrid and AC Milan on seven titles.

Tottenham will have only regrets as their luck ran out after a season of comebacks and great escapes in the competition with a squad that had no additions.

Klopp was relieved after six losing finals, stretching back to his spell at Borussia Dortmund.

“Did you ever see a team like this? Fighting with no fuel in the tank,” the German said.

Victory against Tottenham came six years after Dortmund were beaten by Bayern Munich in the Champions League final.

Klopp is now European champion for the first time.

“I am so happy for my family,” he said. “They suffer every year when we go to a final, the last game of the season.”