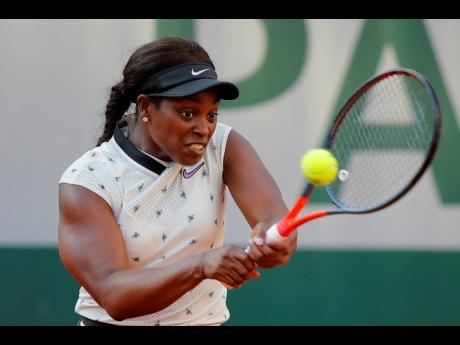 AP
Sloane Stephens of the US plays a return to Spain’s Garbine Muguruza during their fourth-round match of the French Open tennis tournament at the Roland Garros Stadium in Paris yesterday.

Sloane Stephens has no other Grand Slam winners – or even finalists – left in her side of the draw at the French Open after beating 2016 champion Garbiñe Muguruza 6-4, 6-3 yesterday.

The seventh-seeded American clinched victory on her fifth match point, setting up an intriguing quarter-final against Johanna Konta of Britain – herself through to the final eight at Roland Garros for the first time.

The path to a second straight French Open final, and a third overall at a major after her title at the US Open in 2017, would seem to be clearing up for Stephens.

If she beats the 26th-seeded Konta, then her semi-final opponent will be either 31st-seeded Petra Martić of Croatia or unseeded 19-year-old Markéta Vondroušová, a left-hander from the Czech Republic. Both are playing in the last eight of a major for the first time.

But Konta does have big-match experience, having reached Grand Slam semi-finals at the Australian Open in 2016 and Wimbledon in 2017.

She also has a 2-0 record against Stephens.

Both those matches were played this year: last month in the rain in Rome, the other on Australian hard courts in Brisbane.

“I lost to her in Rome. Really tough day,” Stephens said. “Bad circumstances. Out of the mind. So I’m just going to go in with a clean slate.”

The straight-sets defeat in Brisbane was Stephens’ first match of the year, and she admittedly was not well prepared.

“I had a lot of stuff going on at the beginning of the year,” she said. “I think everybody knows I needed a coach. I was kind of all over the place.”

The third-seeded Romanian is still in the draw.

“We have a long way to go until we get there,” said Stephens, who may face another American.

There are three remaining, in the other side of the draw: 14th-seeded Madison Keys, 17-year-old Amanda Anisimova, and 20-year-old Sofia Kenin – who knocked out 23-time Grand Slam champion Serena Williams on Saturday.