Girlz get home comforts in France 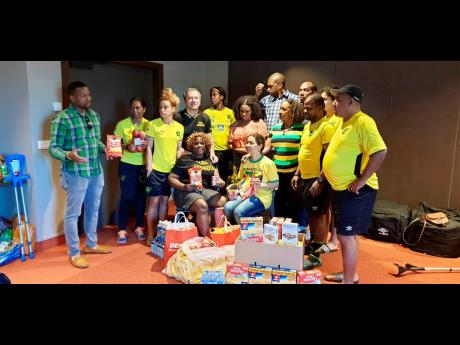 The Reggae Girlz received a welcome boost yesterday when they were visited by the Jamaica Association in Switzerland and presented with food supplies and pledges of support from Jamaicans in Europe.

The group of nine, headed by president Rashid Hall, made the 90-minute journey from Geneva, Switzerland, to make the presentation. Among the items presented were water, isotonic drinks, protein, fruits, and Jamaican favourites such as corned beef, bottled pepper and water crackers.

“We are very happy to be able to assist today as the Jamaica Association in Switzerland and I know we are in France now, and it is not our jurisdiction, but it is just 90 minutes from Geneva. There was an opportunity to help, and we decided that we had to,” Hall said.

“She was the one who reached out to us and asked if there were a few Jamaicans who would be willing to assist, and we saw that as a real opportunity to allow Jamaicans in the space to make an impact and do something positive. We sent out the messages, and we got the responses,” he said.

So positive was the response that Magaret Detraz, sporting crutches to support her freshly broken leg, Phillipa Sauterel, sporting one crutch also due to a broken leg, refused to miss the trip. Others such as new father Nasser Johnson, Francois Detraz, confessed Reggae Girl wannabe Pamela Coke-Hamilton, Sheldon and Rochelle Barnes gave up all they had to do to make the journey.

“The response was great, and we were able to put those hours in to purchase what we needed to purchase.

“Saturday was actually my birthday, and what I was doing was buying stuff for the Reggae Girlz, and that, for me, was the most fulfilling way that I could have spent my birthday,” Hall said.

“It is always good to come to a different environment and see your own people, and the items that they bought for us are really welcome. It was a great gesture, and on behalf of the federation, I want to thank them,” Menzies said of the presentation made.

He added: “Even without the gifts that they brought, it was great to see them and receive that moral support.”