Jamaica growing in the field – Ricketts 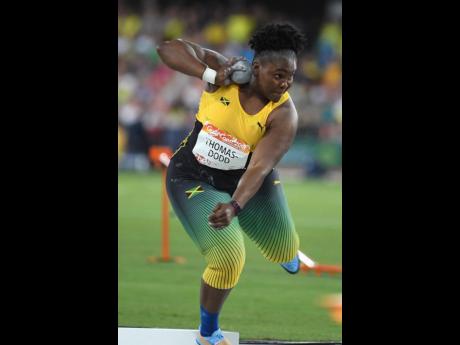 Fans may be mourning the end of a golden era of Jamaican sprinting, but according to two respected coaches, the nation is becoming a field event power. Kerry-Lee Ricketts, husband and coach of triple jumper Shanieka Ricketts, and Marlon Gayle of the G.C. Foster College of Physical Education and Sport believe that Jamaican jumpers and throwers will challenge for medals at this year’s IAAF World Championships in Doha, Qatar.

As evidence, Ricketts pointed to recent results from throwers Fedrick Dacres and Danniel Thomas-Dodd, and jumpers Kimberly Williams and Tajay Gayle. The University of the West Indies jumps tutor argued, “Last year, we had a great year. We had Fedrick Dacres, we had Shanieka, Thomas-Dodd, Tajay Gayle, as well and Kimberly, all these people out there doing fantastic. So this year, all these names I called and others who are coming up, definitely, I think all of these people could be on the podium for Jamaica.”

Dacres, Thomas-Dodd and Williams all won Commonwealth Games gold for Jamaica, with Ricketts’ wife second in the Games’ triple jump.

Gayle started with a look at the discus.

“With the significant improvement of Shadae Lawrence, 65.05m, I think she definitely has the ability to not just make the final but to be an upsetter at the World Championships, also Fedrick Dacres,” he said.

Thomas-Dodd has improved her national shot put record to 19.48m, and Gayle predicted: “I’m sure there are others. As the seasons gets older, more persons will show their hand and I am just hoping for the best that at least we will have another female qualifier for the World Championships.”

Both men were gung-ho about the men’s long jump. Ricketts, who now coaches 2017 and 2018 national champion Ramone Bailey, was delighted when Gayle’s G.C. Foster College charge, Shawn-D Thompson, jumped past 8.08m on May 11.

“The first time he jumped eight (metres), I was more excited than Mr Gayle, the coach,” he recalled. “I was jumping up and down.”

“This is probably the first year we have four Jamaicans over eight metres”, She said before mentioning his namesake, the University of Technology discovery who won the Shanghai Diamond League and Kingston College schoolboy Wayne Pinnock.

Gayle and Bailey have led the surge. Bailey won the CAC Games gold medal last year, and on May 4, Gayle became the third-farthest Jamaican jumper of all time with his world-leading mark of 8.30m.

In the triple jump, Jordan Scott and Odaine Lewis went one-two in the NCAA Indoor Championships.

“We have a lot of people, and we have Thompson, and so I’m really excited,” Ricketts said.