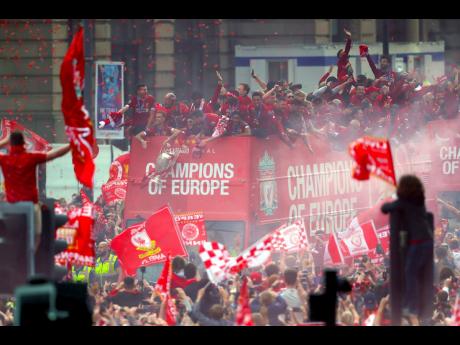 Half a million fans welcomed Liverpool back to Merseyside as the team paraded its UEFA Champions League trophy through the city centre yesterday.

Liverpool manager Jürgen Klopp and his players flew home before boarding an open-top bus emblazoned with the message, ‘Champions of Europe’.

Holding aloft the European Cup, Liverpool’s players were met by a sea of red as they embarked on a tour of the city centre. Huge crowds of Liverpool fans wearing the team’s jersey and flying flags packed out roadsides, chanting and singing in the sunshine.

Liverpool beat Tottenham 2-0 in the all-English final in Madrid on Saturday.

An estimated 500,000-plus people crammed the 13-kilometre (8-mile) stretch of the parade route — which took almost four hours to cover — some holding inflatable European Cups and letting off smoke canisters.

Klopp sat at the back of the bus, occasionally giving the impression of a teacher on a school outing, but he was far from the party pooper, often jumping out of his seat to give a thumbs up, a wave or a hearty laugh.