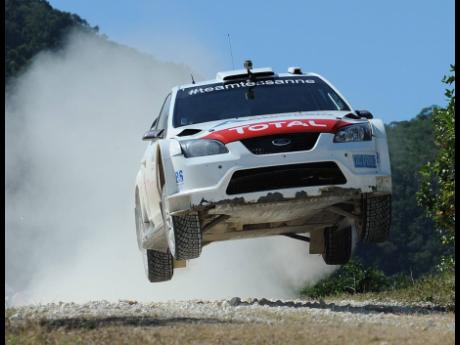 Officials from the team of Jamaican rally driver Jeffrey Panton and his co-driver, Mike Fennell Jr, say both men are in good condition after a crash on the first stage of the SoL Rally Barbados yesterday.

Both men were taken to the Queen Elizabeth Hospital in Bridgetown, Barbados, after their Ford Focus WRC rally car careened off the road before hitting a tree and coming to a stop soon after.

Fennell Jr received minor cuts in the accident, but Panton was pinned in the car and had to be cut free with ‘Jaws of Life’ by the rescue crew. They found him to have soft-tissue damage and a minor cut to the head from glass, as well as back pain.

The crash happened on the first stage at Kendal, St John, in a chicane in the area of Guinea Plantation before noon.

Christopher ‘Teach’ McFarlane, also a Jamaican rally driver, was a spectator at the event.

TOO HARD, TOO FAST

Trevor Thorpe, a journalist with Barbadian media house The Nation, described Panton as having “too much wood in the fire” as he, like McFarlane, believes he went too hard and too fast in trying to catch the local team of Dane Skeete and Tyler Mayhew, who were leading at the time.

Panton’s condition since arriving at hospital is unknown as his crew have not released such details to the public.

The Jamaica Millennium Motoring Club, in an official release on its website yesterday, wished both Panton and Fennell Jr a full and speedy recovery.

Panton and Fennell Jr are no strangers to Rally Barbados, having won the last three titles. They were also victors in the event when it was known as the International All Stages Rally.