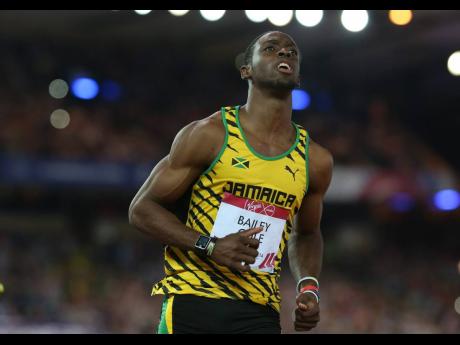 When Kemar Bailey-Cole settles into the blocks at this Saturday’s Racers Adidas Grand Prix, he will be hoping to put himself back in the fast lane. Promising runs so far this year have been the reward of adjustments to his training programme and careful work to prevent injury. The changes have given Bailey-Cole cause for optimism.

The 2014 Commonwealth 100 metres champion stepped easily to a time of 10.26 seconds last week in another sign that he has held his injury issues at bay. “I’ve changed my training programme, went back to the old days when I just started, the pool and track, pool and track,” he reported late last month. The training formula has kept the Racers Track Club man clear of the muscle tightness that has hampered him in the past.

With the Grand Prix and then the June 20-23 National Senior Championships on his radar, he is taking no chances.

“Every time I have a track meet, I have to get a deep massage, keep it loose, because my body tends to tighten more,” he explained.

He will face a classy field on Saturday, including Britain’s European champion Zharnel Hughes and 2011 World Champion Yohan Blake, along with the 2013 and 2015 World Championship bronze-medal winners, Nesta Carter of Jamaica and Trayvon Bromell of the United States.

Also listed for the Racers Grand Prix 100m are Jamaica’s 2007 and 2009 World bronze medallist Asafa Powell and Kendel Williams, who beat Bromell at the 2014 World Under-20 Championships.

In such company, the former Old Harbour High School star may need to produce his 12th career sub-10-seconds clocking.

His last such time was his personal best of 9.92 seconds in 2015, and Bailey-Cole, who finished just behind Carter in the 2013 Worlds, knows what it will take to get back to his best.

He took the Commonwealth title on a cool night in the Scottish city of Glasgow in 10.00 seconds, and he knows that a return to that kind of form would do him a world of good. Asked about his prospects of making the national team to the World Championships, he struck a confident note.

“I always show up at Trials”, he said, “so I’m just looking forward for Trials right now and make the team.”