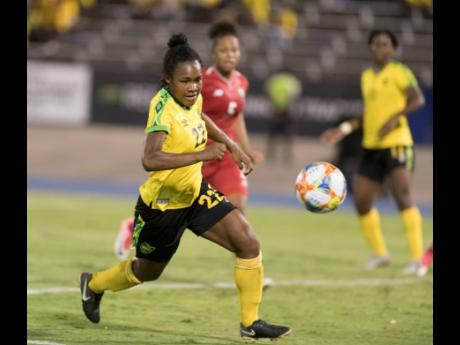 The coach noted that Grey was chosen because she possesses similar qualities to McKoy, who has remained in France with the team.

However, there are no guarantees that Grey, a former national Under-20 player, will be available as she is currently sitting exams at school.

Menzies described the change as a ‘like-for-like’ swap, noting that Grey can have a strong impact on the team.

“Kayla was ruled out because of a knee injury. She (Grey) was our first choice (replacement), but we also have a second choice. But she (Grey) hasn’t been confirmed as yet because she is in the middle of school exams and we are waiting on confirmation,” he said.

“She gives us depth. She was one of the better players against Panama at the National Stadium, and she gives us youth. She also has a knack for scoring goals, so it was a one-on -one swap,” Menzies added.

Although top striker Khadija Shaw has fully recovered from her knock in the recent Scotland friendly game, Menzies insists that the injuries have not disrupted the team’s preparations ahead of their group opener against Brazil on Sunday as they are used to working with different combinations of players.

“We have always been using other players, so the key is to stay focused,” Menzies said. “The last two days have been great. We did some hard work ... but we will be fine.”

Meanwhile, Menzies described the spirit in the camp as very high and shared that the players were upbeat going into their first game.

“They (players) are all about the spirit, and the spirit here is great, and we are training at a excellent facility. We always have adversity, so it’s important to keep the focus. But it doesn’t matter who we suit up against; it will be the same talent that we have here,” he added.

Meanwhile, assistant coach Andrew Price, who was suspended for two weeks because of an inappropriate email sent to the general secretary of the Jamaica Football Federation, said he was glad to be back with the Girlz and was also looking forward to the team’s debut on Sunday in Grenoble.

“It is a great feeling [to be back]. We are family, and when you are reunited with family members, it is a joy. The camaraderie and the energy in the camp is very high. Now it is on to the business at hand and getting ready to put on a performance for the Jamaican people,” said Price.