Ronaldo’s Portugal look for another title 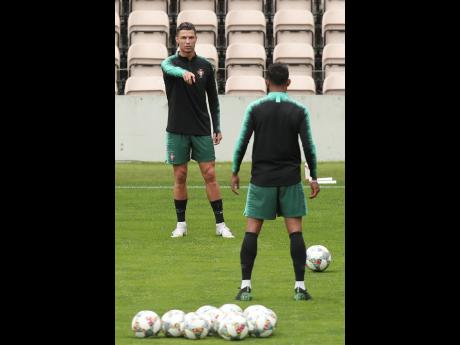 The inaugural UEFA Nations League reaches its conclusion this week with the competition’s final four in Portugal, when Cristiano Ronaldo will try to lead the hosts to another European title.

For England, it’s a chance to lift an international trophy for the first time since the 1966 World Cup, while a revamped Netherlands squad and Switzerland will also be fighting for the title.

Portugal meet Switzerland in the first semi-final today in Porto, while England take on the Dutch tomorrow in the nearby city of Guimaraes in northwestern Portugal. The winners play the final on Sunday in Porto, with the losers meeting in the third-place match in Guimaraes.

Ronaldo, who led Portugal to their first major title at the 2016 European Championship, took some time off from the national team after their elimination in the round of 16 of the World Cup last summer, but he is back at full strength for the inaugural Nations League at home. He didn’t play in any of the team’s matches in the competition last year, though he was back for the European qualifiers earlier this year.

UEFA launched the Nations League to try to give national teams more meaningful games and reduce the number of friendlies. The creation of yet another UEFA competition attracted a lot of criticism at first, but, eventually, it produced some exciting games.

With a format in which only the group winners advanced, and which included relegation between leagues, there were several matches with high stakes involved, especially in the final rounds. England needed a late winner by Harry Kane against World Cup runners-up Croatia to eliminate Spain and seal the team’s spot in the final four.

“Some people were skeptical against the Nations League, especially the clubs. They didn’t think this could be an interesting competition,” Switzerland coach Vladimir Petkovic said through a translator. “But it’s the contrary. Every single team in every single league wanted to win. We are happy to be here, and I think in the future we will see that this competition might become even more interesting.”

The tournament also gave smaller nations a better chance of qualifying for the 2020 European Championship as all group winners in the four leagues were guaranteed a place in a qualifying play-off.

For a team like England, though, the competition is mainly another opportunity to win an official title, something they haven’t done in more than five decades since that World Cup at home.

The Englishmen have been on a roll recently, having made it to the semi-finals of the World Cup last year. They followed that up with convincing wins over Spain and Croatia in the Nations League and began the year with a 5-0 rout of the Czech Republic and a 5-1 victory over Montenegro in European qualifying.

Switzerland are yet to win an international trophy, and the Netherlands haven’t won a title since the 1988 European Championship, when current coach Ronald Koeman still played for the national team.

“You are playing for a trophy,” Dutch forward Memphis Depay told UEFA’s website. “That’s very important for us. We need to try to get used to winning trophies if we want to be a successful team, because that’s what successful teams do. And when you’re this close, two games away from the prize, then that’s a great goal.”

The Nations League winner will be taking home a prize of €10.5 million, with €9 million going to the runner-up.