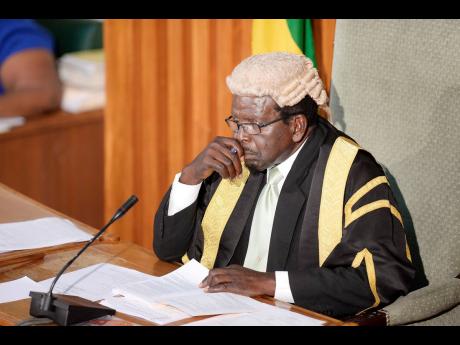 Pearnel Charles, grandfather of injured Reggae Girlz forward Kayla McKoy, said his family is deeply disappointed that she is going to miss this FIFA Women’s World Cup tournament, which gets under way in France tomorrow.

McKoy has been ruled out of the tournament with a knee injury, which she suffered during the Reggae Girlz’s last friendly match against hosts Scotland in Glasgow a week ago.

The 22-year-old, who has made three appearances so far for the Reggae Girlz, is expected to be replaced by the University of Washington striker Mireya Grey.

Charles, a veteran politician and current Speaker of the House of Representatives in the Jamaican Parliament, told The Gleaner in an interview yesterday, that he and other members of the family were disappointed that McKoy would not be able to realise her dream of representing the Reggae Girlz at this year’s tournament.

He, however, underlined that they are extremely proud of the youngster and her drive to get to this stage in her career.

“She was so excited to represent Jamaica, but unfortunately, she got hurt,” said Charles. “Everybody is really shocked that she is not going to be playing in the World Cup, but everybody is very proud that she got up to make the team to the World Cup.”

Charles added that McKoy would remain in France with the Reggae Girlz as she continues to receive treatment for the injury.

“She has played three times for Jamaica already, and she was really looking forward to playing for Jamaica in the World Cup, but she will continue to play for Jamaica when she gets better,” Charles added.

“I know that she is very disappointed that she will not be able to play because the MRI shows that she cannot continue to play for the rest of the season,” he added. “It is not only the World Cup that Jamaica is going to play, and so she will remain with the team and give them moral support.”

The Reggae Girlz, who are drawn in Group C alongside Brazil, Australia, and Italy, will open their account against the Brazilians on Sunday in Grenoble.

They will move to Reims to face Italy on June 14 before tackling Australia on June 18 back in Grenoble.