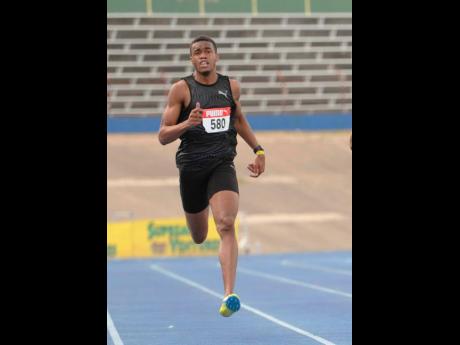 At the 2017 World Championships in London, South African Wayde van Niekerk and Bahamian Shaunae Miller-Uibo attempted the 200m/400m double with less than satisfying results. The tight schedule crushed their golden objectives. That experience and the schedule of this year’s event should be food for thought for those who recommend the same double to Jamaican prospect Akeem Bloomfield.

The South African won the 400m easily, but lost the 200m to Ramil Guliyev of Turkey. Miller-Uibo lost her rhythm while leading the women’s 400m final and was shunted to fourth. Her late rush in the 200m was only good enough to snatch the bronze medal. Both were undone by a schedule overlap that didn’t exist when Michael Johnson and Marie-Jose Perec did similar doubles successfully at the 1996 Olympics.

This year’s World Champs 200m/400m schedule is pretty challenging. The heats and semis of both women’s events are within 75 minutes of each other on September 30 and October 1, respectively. It gets a little easier after that with the 200m final on October 2 and the 400m medal race on the 3rd.

That’s a rest day for Bloomfield if he does the double. The 200m heats and semi are his only races on the 29th and 30th, but the first round of the 400m and the 200m final are both on October 1, about six hours apart.

By comparison, when Johnson and Perec did their Olympic doubles 23 years ago, the 400m was first and there was a rest day before the 200m began. That was the format Johnson demanded as a precondition.

Van Niekerk, world record holder, Olympic champion and twice World Champion, could recommend something similar but after London, he lost interest in the 200m/400m combo.

Simply put, there isn’t anyone else of his stature to request a more helpful schedule. That’s why Bloomfield has decided to choose just one event. Though he has run 19.81 seconds without really concentrating on the 200m, and 43.94 seconds for 400 metres, the double isn’t easy. Given an injury-laden history that started in the 2014 Boys and Girls’ Championships Class 2 100m final, discretion is advised.

He stopped in a 200-metre race this April before producing a steady 4x400-metre performance for Jamaica at the World Relays. What’s the conclusion? While he definitely should explore his potential in the 200m when the risk is minimal, the 400m is the prudent choice.

As things stand, he has the tools to challenge van Niekerk and US sensation Michael Norman, who beat him last year to the NCAA title, for gold at the Worlds and the Olympics next year. All he needs to do is to stay healthy.

Yet, as Jamaicans, we can see him as defender of our time-honoured sprint heritage, with some suggesting that he try the 100. From Miller to Quarrie, Stewart, Frater, Powell, Blake and Bolt, our history is filled with speed. Their accomplishments make fans uneasy in these days after the 2008-2016 golden era of sprinting.

That is understandable but the urge to pull Bloomfield from his role in the re-establishment of Jamaica’s 400-metre tradition must be resisted. When Nathon Allen and Demish Gaye reached the 2017 World 400m final, they were the first Jamaicans to do since Jermaine Gonzales placed 4th in 2011. The last World Champs individual medal came in 2003 when Michael Blackwood took the silver.

If we treat them right, Bloomfield, Allen and Gaye will lead us into an era when there are no gaps between past glory and the present. Perhaps, they can lead us to the top.