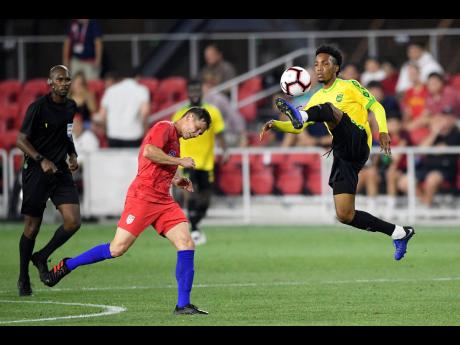 Jamaica’s senior men’s football team head coach Theodore ‘Tappa’ Whitmore said the Reggae Boyz must remain consistent if they are going to do well in the Concacaf Gold Cup tournament this month.

The Jamaicans will enter the tournament on a high after recording a 1-0 victory over the USA in their international friendly match in Washington DC on Wednesday night.

Whitmore said the Reggae Boyz must maintain their discipline and focus if they are going to reach their third consecutive final.

“Yes, the victory is a confidence booster, but we know it is going to be a tough Gold Cup, so what I keep emphasising on his consistency,” Whitmore said, shortly after the team’s return to the island at the Norman Manley International Airport yesterday.

“We can play against a US team and then we going into the Honduras game with a different mentally, so what I would like to see is consistency going forward in this national team and this will in turn give us positive results.

“We know that we have a balanced squad that can go out there and do what we want them to do on any given day.”

Whitmore said he was pleased with the character shown by the team against the US, in spite of unfavourable conditions at Audi Field.

“The way how we managed the game, especially in the second half, we played with a lot of confidence, a lot of ball possession, so I think it was fairly a good performance from the players,” he said.

He said the team has to now forget about the disappointment of losing two straight Gold Cup finals, in 2015 and 2017.

“We have to look past the two previous Gold Cups and just take it game by game, because we have the Hondurans and that is what our main focus is on,” he said. “Once we can get past them, then we will take it from there.

“We haven’t played in the National Stadium for quite a while, so we are looking forward to it. We are looking forward for that home support, because it will be a mental boost going into the game, and coming off a good victory against the US, I think that augers well for us.”

The Reggae Boyz will get their campaign started against Honduras at the National Stadium on June 17.