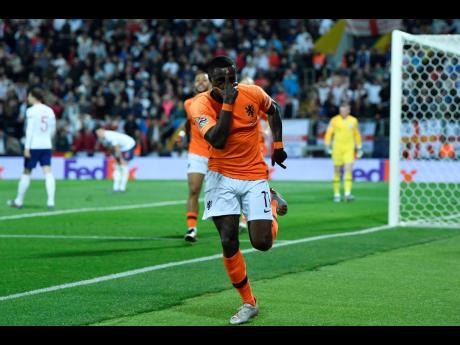 The Netherlands took advantage of two sloppy defensive mistakes by England in extra time to earn a 3-1 win in the semi-finals of the UEFA Nations League yesterday.

An own goal by Kyle Walker gave the Dutch the lead after John Stones gave the ball away, and Ross Barkley then misplayed a back pass to gift the Netherlands a third goal in the 114th minute.

The Dutch will play the final of UEFA’s newest competition against host Portugal in Porto on Sunday when they will try to lift their first trophy since the 1988 European Championship.

England, who were seeking their first title since the 1966 World Cup, will play Switzerland in the third-place game in Guimaraes, also on Sunday.

England took the lead in the first half through a penalty by Marcus Rashford after he was brought down by centre back Matthijs de Ligt. But the Dutch defender made amends by heading in the equaliser in the 73rd.

England thought they had scored a winner in the 83rd, but a video review determined that Jesse Lingard was just offside before he scored from inside the area.

The Netherlands went ahead in extra time after Stones gave the ball away to Memphis Depay inside his own area. The Dutch forward’s shot was stopped by a great save by goalkeeper Jordan Pickford, but on the rebound, Quincy Promes got to the ball first, and his strike deflected off Walker and into the net.

Promes added the third goal after another defensive blunder by England, this time by Barkley, whose short pass went straight to an opponent inside the area.