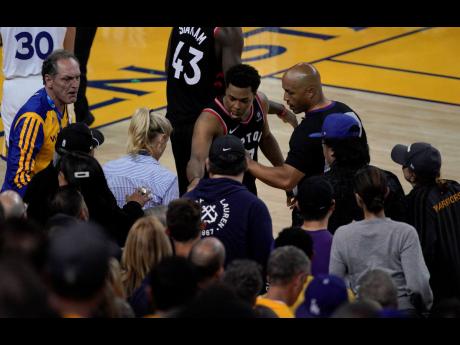 Tony Avelar
Toronto Raptors guard Kyle Lowry (middle) gestures next to referee Marc Davis (right) near the front row of fans during the second half of Game 3 of the NBA Finals against the Golden State Warriors at the Oracle Arena in Oakland, California, on Wednesday night.

The fan who shoved Toronto guard Kyle Lowry during Game 3 of the NBA Finals is also an investor in the Golden State Warriors and will not be permitted to attend any more games in the series.

The Warriors said yesterday that they and investor Mark Stevens, who is listed in the team’s media guide as a member of its six-person executive board, both apologised to Lowry and the Raptors for the incident.

Lowry went into a row of seats along the sideline in an effort to save a loose ball during Wednesday night’s game at Oracle Arena. Lowry landed a couple of seats to Stevens’ left, and video shows Lowry then being shoved in the left shoulder.

“Mr Stevens’ behaviour last night did not reflect the high standard that we hope to exemplify as an organisation,” the Warriors said in a release. “We’re extremely disappointed in his actions and, along with Mr Stevens, offer our sincere apology to Kyle Lowry and the Toronto Raptors organisation for this unfortunate misconduct.”

The Warriors said their probe into the matter is ongoing.

Lowry said he spoke with NBA officials about the incident before leaving the arena. He told The Associated Press that the man, who was not identified at the time, made a vulgar comment to him repeatedly during the brief exchange.

Warriors spokesman Raymond Ridder and security officials confirmed that the fan who shoved Lowry was ejected and escorted from Oracle Arena. Stevens was wearing an NBA-issued credential while he watched the game.

“Hopefully, he never comes back to an NBA game,” Lowry said.

If he does, it won’t be this season. The Warriors said Stevens — who Forbes identifies as a venture capitalist with a net worth exceeding US$2 billion — will not be attending any more games in these finals.