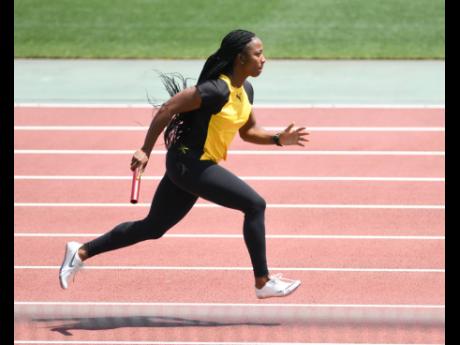 All eyes will be on two-time Olympic Champion Shelly-Ann Fraser-Pryce this evening when she takes the track at the National Stadium, at the fourth staging of the Racers Adidas Grand Prix.

That time is the fastest Fraser-Pryce has registered since her to return to athletics after giving birth to her son, and it placed her on a good trajectory to win a third 100m title at the IAAF World Athletics Championships this September in Doha, Qatar.

But Fraser-Pryce may not be able to take comfort in registering another sub 11 seconds clocking as the main players who are expected to factor at the World Championships have also showed flashes of brilliance, including Elaine Thompson’s world leading performance of 10.89 seconds two days ago in the event.

Fraser-Pryce, the main headliner for the meet, will take the track at 8:10 p.m.

Another former World champion, Yohan Blake, is also ready to stake his claim in the men’s 100m again.

Blake sounded a warning last month when he ran 10.01 and 9.98 seconds at a meet in Florida.

Blake will line up against former world record holder Asafa Powell, Kenroy Anderson, defending champion Zharnel Hughes and Kemar Bailey-Cole, who is still making his return to the sport after injuries sidelined him for a couple years.

The women’s 400m should also bring some spark to the meet as Bahamian Shaunae Miller-Uibo, the reigning Olympic Champion will race against Jamaicans Chrisann Gordon, Christine Day, and Anastasia Le-Roy.

Fred Kerley, the eighth fastest male quarter-miler in history, will start as favourite in the men’s 400m. But Jamaica’s third fastest 400m runner, Nathon Allen, will be looking to stage an upset.

RJRGLEANER National Sportsman of the year Fedrick Dacres headlines the field events as he takes part in the Men’s Discus Throw, along with fellow Calabar High School old boy Kai Chang and Mason Finley of the USA. Danniel Thomas-Dodd and compatriots Latifah Smith, and Devia Brown will take on Trinidad and Tobago’s Cleopatra Borel in the Women’s Shot Put.

The meet gets under way at 6:50 p.m. with the women’s Triple Jump, which include Jamaica’s Shanieka Ricketts, who won a silver medal at the Commonwealth Games in Australia last year.