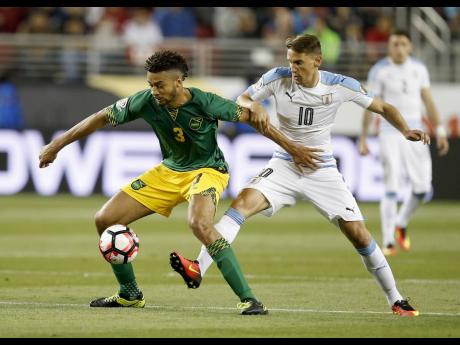 Having missed the 2017 Concacaf Gold Cup tournament due to injury, national central midfielder Michael Hector said he is delighted to be back in the national team and he is looking forward to helping Jamaica win this month’s tournament.

The Reggae Boyz, who have been to the previous two finals of the competition, will get their campaign started against Honduras at the National Stadium on June 17.

Hector, who spent last season on loan from Premier League side Chelsea at English Championships side Sheffield Wednesday, reflected on the team’s 1-0 win over hosts USA three days ago, and said it is a privilege to be back in the squad.

“We have a strong team because the performance against the US was good,” he said, “but we are just taking it game by game because we don’t want to get too carried away and get ahead of ourselves. So let’s see where we can go.”

Hector said the victory has given the team improved confidence ahead of the Gold Cup.

“It is a talented group, it is young and full of energy and you never know, because if saw you the goal against the US, then you know that anything can happen,” he said.

“When you watch the training, there is a good vibe to the group, so it is a privilege to play with them and I know that we will do well at the Gold Cup,” Hector said.

The 27-year-old Hector, who was signed by Chelsea in 2015, has not played for the London-based club. He has also had loan spells at Reading, Eintracht Frankfurt and Hull City.

He said that the he is not sure where he will be plying his trade next season.

“I am going to play this tournament and then I see what happen after this,” he said, “I am still a Chelsea player because I am contracted to them for another year, so we will see what happens,” he said.