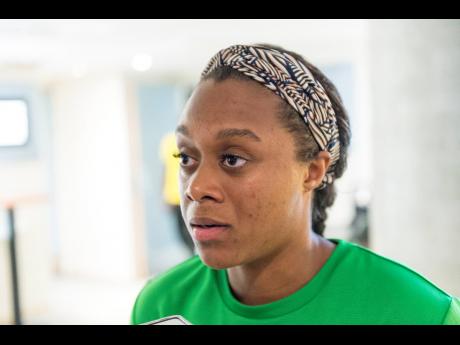 Tomorrow, the AS Roma defender will come face-to-face with a player she grew up idolising, when the Reggae Girlz face Brazil in their opening match of the 2019 FIFA Women’s World Cup at 3:30 p.m. (8:30 a.m. Jamaica time) at the Stade des Alpes.

Despite the Brazilian’s recent injury issues and her advanced age, marking her is an assignment that most defenders would lose sleep over.

However, the 22-year-old Swaby can hardly wait, as she looks to help the Jamaicans to a positive result in their début on this stage.

“She (Marta) is obviously the biggest name in women’s football. I grew up in the US, but one name that would always come to mind is Marta’s. Everybody wanted to be the number 10 when they are little. It’s going to be incredible to play directly against the player who inspired so many people and I am really proud and honoured that I will be able to say I am on the same stage as her,” Swaby told The Gleaner yesterday from the team’s hotel in the slow-paced ski town.

BEST OF ALL TIME

Marta, 33, is regarded as the best female footballer of all time and has been dubbed the ‘Pelé in skirts’ by the man himself. She is a six-time recipient of the FIFA World Player of the Year award, the latest nod coming in 2018, and has won two silver medals at the Olympic Games. She also walked away with the golden ball and the golden boots from the 2007 FIFA Women’s World Cup, after scoring seven goals at that tournament.

Swaby, who joined the Giallorossi last November, is anticipating the test and believes her time in the Italian capital has helped to prepare her for challenges such as the ones she will face throughout this tournament starting tomorrow with Marta and her South American teammates.

“I am definitely looking forward to the challenge. However, at the end of the day, it’s another game, we are going to do what we do and they will do what they do. We obviously have to be aware of really talented players, but at the same time, we have to stick to what we know and go out there and do our best,” Swaby noted.

“The experience at AS Roma has been incredible for me,” she added. “I have grown so much as a player and obviously as a person who was kind of thrown into an environment I had never been in before. Obviously, the league also is a lot more technical than anything I had experienced so I was able over the last few months to focus on a weakness of mine, I have grown a lot and I am more confident going into the World Cup.”

Jamaica’s other Group C opponents are Australia and Italy, another team that the powerfully built Jamaican is looking forward to facing in France.

“I have grown to know some of those (Italian) players really well because some of them are my teammates and also others I have played against. I will probably feel the most relaxed of the three (group) games because I have experienced the opponents a little bit (but) we will do our homework as a group and make sure that we are fully prepared for that challenge,” Swaby stated.

The experienced campaigner also highlighted the Jamaicans’ camaraderie and singled out the team’s resolve as a major tool in their arsenal against their more fancied group opponents.

“I think the coaches have found a group that has really gelled and meshed well together. Obviously, all the players here are really talented and there are a lot of talented players, who didn’t make the roster, but it’s not always about the individual, it’s about the cohesion and we have depth and we also have the common goal in mind,” Swaby said.

“If anybody has watched us play, we never roll over and die. We are a team that’s always in the game. People can expect to see resiliency from us,” Swaby submitted.