Being underdogs motivates us – Asher 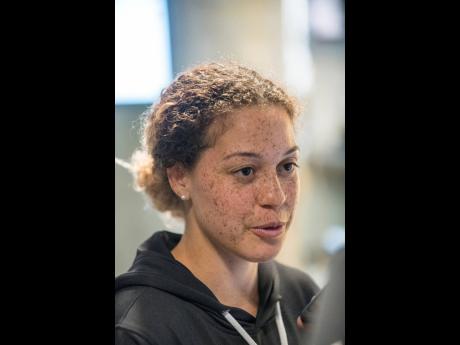 Norway-based Jam-aican midfielder Chinyelu Asher is urging her teammates to embrace their underdog tag at the FIFA Women’s World Cup in France, while calling for focus ahead of today’s opening fixture against Brazil.

The Jamaicans will face the South Americans at 3:30 p.m. (8:30 a.m. Jamaica time) at the Stade des Alpes, and Asher, one of the most experienced players in the squad with 21 caps, believes that the ‘dark horse’ title that has followed the team to France will serve as added motivation for the team at the tournament.

“We don’t need anyone to give us a chance here,” Asher stated. “We take our opportunities ourselves, that’s how we got here. We are the underdog side, I love that personally. We are the dark horse. We have been titled the sweethearts of the tournament, so we have a few people who are aligned with our views and I think we can do really well. It’s a tournament, it’s fun, it’s unpredictable, we’ll just play our games and see what comes.”

With the confetti already settled on the ground and the fanfare around their arrival in Grenoble having subsided, the Stabaek IF midfielder is now fully focussed on the task ahead and underlined that the entire unit needs to be fully in sync if they are to meet their objectives of progressing beyond a tough group, which also includes Australia and Italy.

“A lot of focus, that’s really what it comes down to, we kind of had the welcoming parties when we came down here and a lot of excitement just around the start of the games, but everyone is now focused, repeating our duties and plans for the game and just keeping that in line so that we can execute on Sunday (today),” Asher added. “We are very much looking forward to the Brazil challenge, but I have to say that any team that’s made the World Cup is a big side, including us, so we are giving them the same attitude that we will give any other side, but yes, there is a lot of respect.

“This is a new team, it’s been developing, the programme reopened in 2014, so yes, there are some new faces, that’s bound to happen, but we welcome everybody with open arms, love and chemistry and I hope that it shows on the field,” said Asher.

Only Sashana Campbell, with 24 caps, and Khadija ‘Bunny’ Shaw (23) in this current squad have played more times for the Reggae Girlz than Asher and the midfielder says she is extremely proud to have played such a figural role in the team’s historic accomplishment.

She is well aware that the team’s qualification and progress will have a far-reaching impact beyond the shores of Jamaica and spoke to the team’s role in advancing the development of women sports.

“It’s an honour to be part of a history-making movement and I think the implication of that goes beyond Jamaica. It goes for our Caribbean region, but also women’s sports in general and creating a path, and being pioneers, as well as what we want women sports to look like in the future,” said Asher.