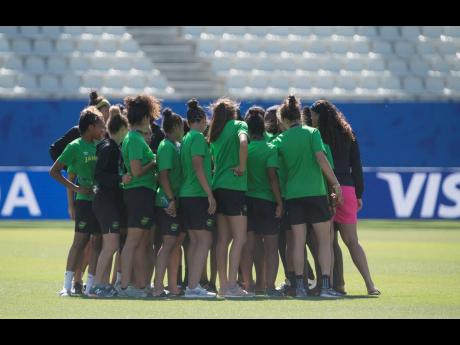 When Jamaica’s Reggae Girlz play Brazil in their opening game at the 2019 FIFA Women’s World Cup (FWWC) today in the French Alps, it will be a coming together of opposites.

On one hand, the Jamaicans enter the tournament as the youngest team, with an average age of 23 years and seven months, with Brazil’s 28 years and five months average, making them the second oldest at the competition, behind the United States (29 years).

For perspective, 41-year-old attacker Formiga, a legend of the game and the oldest player at the tournament, played her first FWWC in June 1995, before more than half of the Jamaican squad were even born. Amazingly, her 186 caps for Brazil is just 56 than the combined Jamaican total, and while Brazil are making their seventh straight appearance at a FWWC, this is of course the Jamaicans’ first.

None of that matters to Reggae Girlz head coach Hue Menzies, who made it clear that while his team respects the Brazilians and their experience, they will be going all out for a win when they face the South American giants at the Stade des Alpes at 3:30 p.m. (8:30 a.m. Jamaica time).

“These girls have a lot of experience in dealing with adversity, and I think this game is just another adversity that they can handle,” Menzies said in yesterday’s pre-match press conference. “Age is just a number. Our girls are younger, but they have been through a whole lot.

Menzies’ confidence would have been helped by the news that iconic striker Marta will miss today’s game after failing to recover in time from her left thigh injury.

A playful fist pump and an excited ‘yeah!’ was his reaction to the news, and while the coach insists his plans won’t change much because of the striker’s absence, he is determined to get a positive result today, as he pushes his team towards their basic goal in France, progressing beyond the group stage.

“Obviously, we don’t change much, we know Brazil has depth and they will probably find their new Marta tomorrow. We, obviously, know the impact she has, how she moves with the ball, but we don’t plan to change much. We have our own game plan, whether it’s defensively or offensively. It changes a little bit defensively because, obviously, they try to find her quite a bit and her movement is unbelievable,” Menzies reasoned.

Interestingly, Brazil are far from invincible, after coming off eight straight losses, but the Jamaican coach is all too mindful of the dangers presented by a wounded and desperate predator.

“We are an inexperienced team and Brazil is an experienced team. What people don’t realise though is that they haven’t won a game this year and that’s scary for us, because they are going to come out trying to get results, so we are prepared for them coming at us and pressing us early. Our biggest asset is our athleticism, how do we counter them trying to come at us, and that’s what’s going to be the big issue for them with us,” he added.

Meanwhile, captain Konya Plummer echoed her coach’s confidence and believes her girls are primed for a strong performance against their world No. 10 ranked opponents.

“Whatever the ranking is, as coach says, we don’t fear anybody, ‘We likkle but wi tallawah’ and we are just looking forward to competing to the best of our ability,” Plummer said.

“It’s a historic moment for us and we are really excited to be here. Our whole lives we’ve been watching the World Cup on TV and it’s funny how we are here now. The journey has been long and hard, we were faced with a lot of adversities, but that’s what makes us stronger,” said Plummer.