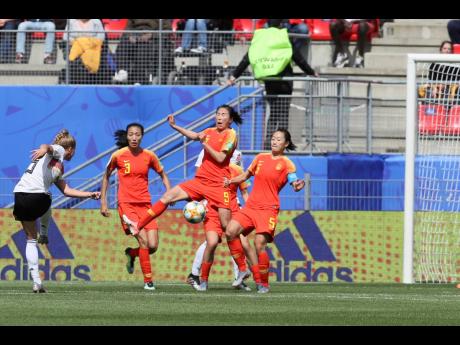 Jamaicans Princess Brown and Stephanie-Dale Yee Sing were in action as assistant referees in Germany’s 1-0 win over China in Group B of the FIFA Women’s World Cup yesterday. The duo made a total of four offside calls between them, with three going to Germany.

Giulia Gwinn scored the second-half winner as the Germans started their campaign for their third World Cup title yesterday.

Gwinn’s powerful 66th-minute shot from the edge of the penalty area flew into the left corner. The ball fell to her after Chinese defenders failed to properly clear a corner floated in from the right.

In an even first half at Roazhon Park, in the Brittany city of Rennes, Germany defender Carolin Simon hit the crossbar and China striker Yang Li hit the post.

China failed to take advantage of pressure they created in the second half.

Germany won their last title in 2007 and next face South Africa in Group B on June 17 in the southern city of Montpellier.

China, runners-up to the United States in 1999, play Spain the same day in the northern port city of Le Havre.

The other game from the group saw Jennifer Hermoso score two penalties, while Lucia Garcia netted the other as Spain beat South Africa 3-1. Thembi Kgatlana got South Africa’s goal.

In Group A, Norway blanked Nigeria 3-0 through goals from Guro Reiten, Lisa-Marie Utland and an own goal from Osinachi Ohale.