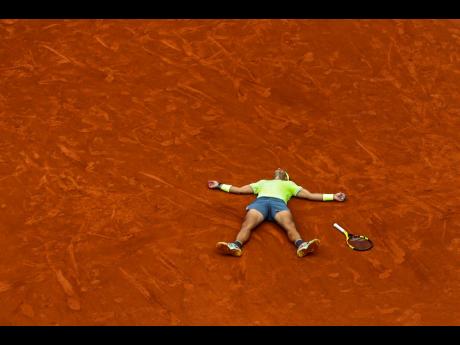 For a few, fleeting moments yesterday, Rafael Nadal found his French Open supremacy seemingly threatened by Dominic Thiem, a younger, talented opponent challenging him in the final for the second consecutive year.

A poor game from Nadal allowed Thiem to break him and even things at a set apiece. That development brought fans to their feet in Court Philippe Chatrier, roaring and clapping and, above all, wondering: Was this, now, a real contest? Could Thiem push Nadal more? Could Thiem make this surge last? Would Nadal falter?

That the questions arose at all was significant. The answers arrived swiftly. Nadal reasserted himself, as he usually does at Roland Garros, by grabbing 16 of the next 17 points and 12 of the remaining 14 games, pulling away to beat Thiem 6-3, 5-7, 6-1, 6-1 for his record-extending 12th championship at the French Open.

No one in tennis ever has won any major tournament that frequently. Then again, no one ever has been as suited for success on any of the sport’s surfaces as this 33-year-old Spaniard is on red clay: Nadal is 93-2 for his career at Roland Garros, winning four in a row from 2005-08, five in a row from 2010-14, and now three in a row.

“I can’t explain my emotions,” said the No. 2-seeded Nadal, who dropped to his back after the final point, getting that rust-coloured dirt all over his neon yellow shirt, then wiped away tears during the trophy ceremony.

Looking at the bigger picture, he is now up to 18 Grand Slam trophies, moving within two of Roger Federer’s men’s record of 20.

Nadal, however, did not want to entertain any discussion of a pursuit of Federer.

“I am not very worried about this stuff,” Nadal said. “You can’t be frustrated all the time because the neighbour has a bigger house than you or a bigger TV or better garden.”

Thiem, a 25-year-old Austrian who was seeded No. 4 and upset No. 1 Novak Djokovic in a draining, rain-interrupted semi-final played over two days, was eyeing his first major title in this rematch of the 2018 final in Paris. But again, he couldn’t solve Nadal.