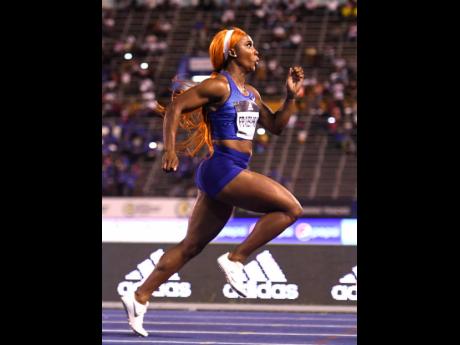 Ricardo Makyn
Shelly-Ann Fraser-Pryce on her way to clocking 10.88 seconds for victory in the Women’s 100m sprint at the Racers Adidas Grand Prix at the National Stadium on Saturday night.

The beaming smile Shelly-Ann Fraser-Pryce flashed after she registered 10.88 seconds to win the women’s 100m at the fourth staging of the Racers Adidas Grand Prix last Saturday night wasn’t just because she had run her fastest time since competing at the 2016 Olympic Games.

The two-time Olympic 100m champion also smiled because she is enjoying the process of working to reclaim her status as the most dominant force in female sprinting, she hinted after the race.

“The last time I ran 10.8 was 2016, so it is a great feeling, but it is also the work [I have been doing], continuing to trust the process, and it is not just about winning; it is about enjoying the process and taking my time to get back where I was and to make the team [to compete at the IAAF Word Championships in Doha, Qatar, this September],” Fraser-Pryce said.

The diminutive Fraser-Pryce separated herself from the field with her signature ‘pocket rocket’ start to post the second-fastest time of the season and also break Christiana Williams’ meet record of 11.10.

“I am really pleased with 10.88,” she said. “What more could I have asked for tonight than to come out here at the Racers (Adidas) Grand Prix for the third time and win? Last year, I was just coming back to the sport, and I had the opportunity to win, and tonight (Saturday night), I not only won but also lowered the meet record. So I’m giving thanks for that and looking forward to the national championships,” she said.

Great Britain’s Zharnel Hughes defended his title in the men’s 100m by outsprinting Yohan Blake in a close race. Hughes stopped the clock at 9.97 seconds, while Blake registered 10.01 seconds.

“The start wasn’t the best. The starting blocks sometimes can be messy, but I came out and I gave it my best, and I am happy about that,” Hughes said. “My execution could be better, but the season is long, so as I go along, it will get better.”

American Kendal Williams (10.13) grabbed the third-place spot, while Kemar Bailey-Cole continued to round himself back into shape with 10.15.

Shaunae Miller-Uibo also lived up to her billing as she ran the second-fastest time this season to win the women’s 400m. The tall Bahamian ran a well executed race to register 49.54 seconds ahead of the USA’s Phyllis Francis, 50.85, and Jamaica’s Chrisann Gordon, 51.83.