The Girlz are driving our programme – Ricketts 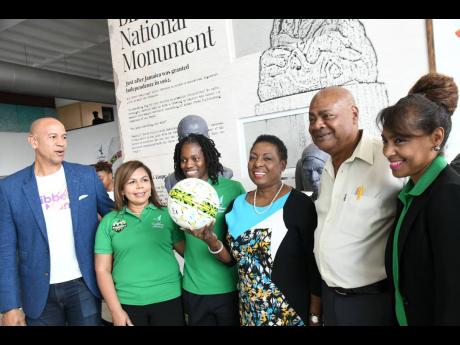 Speaking ahead of Jamaica’s 3-0 loss to Brazil in their first-ever FIFA Women’s World Cup match, president of the Jamaica Football Federation (JFF), Michael Ricketts, lauded the Reggae Girlz for their impact on the national programme and said his organisation is moving to ensure its sustainability.

Cristiane scored a hat-trick to spoil the Jamaicans’ World Cup christening yesterday, but Ricketts, who undefined the team’s value despite their returns here in France, admitted that the country’s football programme is now being driven by the women’s team, a departure from the heavy dependency around the national men’s senior team, the Reggae Boyz.

This comes against the fact that the national women’s programme was abandoned a few years ago before being rescued in 2014 by Cedella Marley, daughter of popular Jamaican musician Bob Marley, in 2014.

“Sometimes we struggle when the men play. In fact, we played Suriname, and perhaps there were about 500 people at the match. We have some real quality players, and I do believe that we will put a programme in place, especially for our Under-16 to Under-17, to ensure that we maintain the highest quality and make the product as such that it is marketable so that people will want to come on board and see them play and invest in these programmes,” Ricketts said.

The JFF boss further underlined the team’s value and insisted that the JFF is putting the necessary measures in place to ensure that the country capitalises on the Girlz’s qualification to this year’s tournament and is in a position to return to this level in the future.

“We must protect the legacy of 2019. On the morning of the 18th, we will be opening a Concacaf B licence course in Kingston, where we are empowering coaches who will coach at age 12 and under. We want to ensure that we integrate a number of women into this, we want to ensure that these coaches can coach others to ensure that we reach out to girls who have been inspired by the qualification of our national team,” Ricketts told The Gleaner.

“We have already been having discussions with at least one international agency who would have given an indication of wanting to support the programme, and we want to start an Under-13 parish competition and ensure this really comes on board,” Ricketts said. “We must protect the legacy of qualifying by ensuring that we bring on new programmes and ensure sustainability and continuity. Having qualified in 2019, we must make sure that we always make an impression on the international stage.”