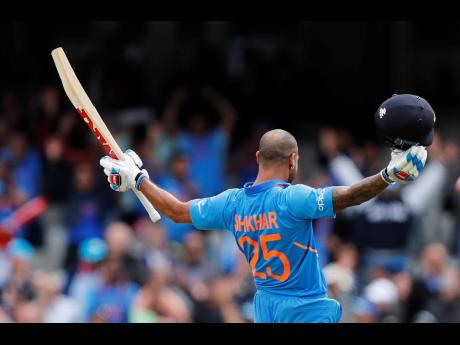 Months of planning came to sweet fruition as India passed their first big test in style at the ICC Cricket World Cup.

India revealed that their ambition ran deep to regain the title they lost to Australia four years ago in crushing the Aussies by 36 runs yesterday at an atmospheric Oval packed to the rim in blue shirts.

India paced their innings superbly in racking up 352-5 with a century by opener Shikhar Dhawan. After choosing to bat first and inflicting the highest World Cup total by a team against Australia, India captain Virat Kohli then unleashed his bowlers, who squeezed the Australians to the point where they never made the chase credible.

The defending champions were all out for 316 on the last ball and were flattered to be within 36 runs of the Indians.

“It was the perfect game for us,” Kohli said.

India was so in control that Kohli took sympathy on Australia’s Steve Smith and signalled to India fans to stop abusing Smith and applaud him instead. Smith, just back from a ball-tampering suspension, gave Kohli appreciation on the field.

“I just felt for him, and I told him I’m sorry on behalf of the crowd because I’ve seen that happen in a few earlier games as well, and, in my opinion, that’s not acceptable,” Kohli said.

His empathy didn’t cover all of the Australians, however. Kohli demanded a performance. Since the last World Cup, when Australia ended India’s reign in the semi-finals, the rivals came to this game 9-9 against each other, including 4-4 this year. But in World Cup history, this was only India’s fourth win against Australia in 12 match-ups.

The teams are good enough to meet again in the play-offs, but India laid down the first marker in this impressive victory.

“We had a point to prove to beat this side,” Kohli said. “We came with intent.”