Oral Tracey | Greatness is more than skill and talent 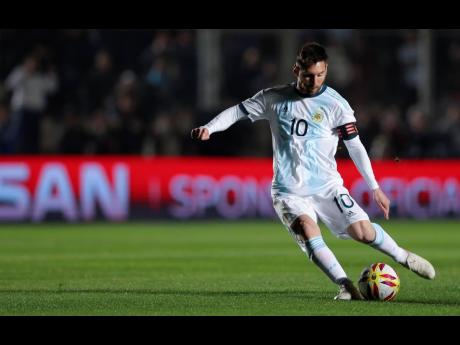 To the ironic credit of the drooling fans of Argentina and Barcelona forward Lionel Messi, they have completely revolutionised the term ‘fan’; by the way they fanatically support their flawed hero. To the neutral and objective onlooker, it borders on player worship gone mad. All the rules of rational analysis and thinking have been displaced by biased, selective and blind praise for the super talented Argentine enigma.

In their desperation to excuse the inexplicable disparity between Messi’s brilliant and breathtaking performances for his club, Barcelona, where he has done and won everything humanly possible as a player and as a leader, and his glaring inability to reproduce that equivalent brilliance in big international games and tournaments for Argentina, Messi’s fanatics have gone down the path of a desperate attack campaign against the top players who have actually dominated and triumphed on the World Cup stage, namely the Brazilian Pele, and the Argentine Diego Maradona.

The feeble cases being put forward are that Pele played in great Brazilian teams, which would have won the World Cup without him, and that Maradona basically had one good FIFA World Cup tournament in 1986, and “one swallow does not a summer make.”

The covert attack then shifts to the World Cup itself, which is now being referred to as an old and outdated concept which is losing its relevance, that the UEFA Champions League is the highest level of football, speaking glowingly about Messi’s performances and title hauls in the Champions League, then stutter with dishonesty and embarrassment when faced with the hard, cold fact that the player they wish to crown the greatest player of all time is yet to win a full senior international title despite playing in teams filled with other global superstars and ranked consistently in the top five in the world.

Another sub-theory is that modern players are generally faster, stronger and better technically equipped because they are better nurtured and prepared due to advances in areas such as coaching expertise, technology, and nutrition, and thus Messi must be greater than all who came before him. The plot further thickens with the notion that Messi is the hero and undisputed king of the current generation, who are rapidly forgetting about players of the past such as Pele and Maradona.

Emotions aside, the fundamental flaw in the thinking of most, if not all, of these Messi fans is that they continue to equate skill, ability, and talent with greatness. They are unable to reconcile that Messi is arguably the most naturally gifted and skilful player ever but that does not necessarily make him the greatest. There is a convenient inability or unwillingness to understand the intangible components of greatness, the components that would trigger a 17-year-old Pele to rise to the big occasion on the biggest stage and score a goal in the quarter-final, a hat-trick in the semi-final, and two goals in the final of his first World Cup in 1958. The same trigger that was set off in Diego Maradona when he dominated and almost single- handedly delivered the World Cup to Argentina in 1986.

It’s a trigger that continues to malfunction for Messi, who, in four World Cup tournaments, has one single assist and no goals in games where Argentina were eliminated. Add that ineffectiveness to defeats in two successive Copa America finals. For those glaring failures, the Messi legion blames his Argentine teammates, his coaches, and the systems the teams play but never Messi’s conspicuous and mysterious inability to lift himself for the big games on the big occasions. So they proceed to chant and cheer for the mercurial Messi as the GOAT (greatest of all time), even as they continue to confuse the elements of skill and talent with greatness.