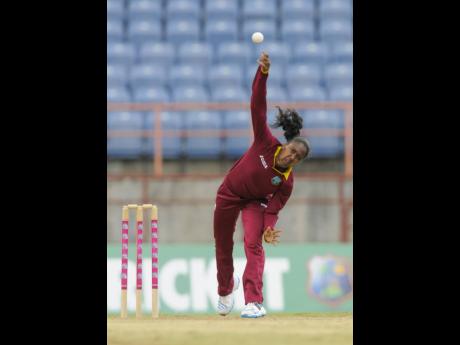 Windies women were once again thoroughly outplayed by England as they went down in the second One-Day International (ODI) by 121 runs under the Duckworth Lewis system here yesterday.

After winning the toss and electing to bat, the home side scored 233 for seven after rain reduced the match to a 41-over contest.

The Windies’ batters never threatened after being reduced to 42 for five early on before another shower placed the match further out of their grasp.

The result gave England an unassailable 2-0 lead in the three-match series after their massive 208-run victory in the first ODI on Thursday.

The win also earned England two points in the International Cricket Council’s Women’s Championship and took them to the verge of qualification for the 2021 World Cup in New Zealand.

Tammy Beaumont, who topscored with 61, and fellow opener Amy Jones, who made 18, posted their second consecutive half-century opening stand, adding 59 runs for the first wicket.

Once Jones lost her wicket to Chinelle Henry, Beaumont found another capable partner in Sarah Taylor (23), adding a further 51 runs.

And even when Afy Fletcher dismissed Taylor and Beaumont with consecutive deliveries to leave the score 110 for three, England still remained in control.

Natalie Sciver scored 35 at better than a run a ball and Anya Shrubsole blasted an unbeaten 32 from just 16 balls, with two boundaries and two sixes, as part of a solid batting effort from the hosts.

Fletcher was the Windies’ best bowler, taking 3-48 from her eight overs.

England’s bowlers then produced a sensational performance in the field as the West Indies got off to a horrible start in their run chase, losing three wickets in quick succession.

Shrubsole accounted for the wickets of openers Britney Cooper (6) and Hayley Matthews (17) before Kate Cross had Kycia Knight out for a five-ball duck to reduce the visitors to 23 for three in the eighth over.

Cross then had Windies captain Stafanie Taylor out for six and Laura Marsha added to their woes when she clean-bowled Chedean Nation for nine as the Windies fell into further trouble at 42 for five.

Another shower resulted in the match being shortened to 28 overs, but the West Indies’ batters made no attempt to chase the target.

Shemaine Campbelle was the topscorer with a pedestrian 29 from 49 balls, while Kyshona Knight was left unbeaten on 14 from 32 balls.

Cross finished with the superb figures of 2-4 from four overs, while Shrubsole took 2-12 from five overs.