Be ‘strong’ against Italy, Girlz – Donaldson 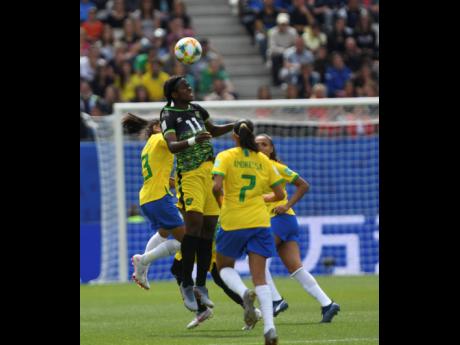 Assistant coach of Jamaica’s national senior women’s team, Lorne Donaldson, believes the Reggae Girlz have moved on from Sunday’s 3-0 loss to Brazil in their FIFA Women’s World Cup opener and are looking forward to their next assignment.

The Jamaicans will play group leaders Italy on Friday at the Stade Auguste Delaune in Reims, 145km northeast of Paris, knowing that they will need a positive result if they are to keep their hopes of progressing beyond the group stage alive.

Sunday’s defeat at the hands of the South Americans might not have been a surprise, given the quality of the opponents, but most would agree that the Jamaicans had more to give in Grenoble, with Donaldson noting that he believes the occasion got to the players.

“[On Sunday] I think the moment got to us,” Donaldson said yesterday after a light training session at Centre de Vie Raymond Kopa involving the members of the squad who did not start in Sunday’s game.

“We are a young team, and sometimes that happens. It’s not a case where there was a lack of concentration, or it’s not that we weren’t playing hard, but sometimes, when certain moments come up, they prove bigger than us,” added the tactician. “That one is behind us now. we know what to expect, and we just have to come out stronger in the next game.”

That game will be played against an Italian team that produced a mild upset over the world No. 6-ranked, pre-tournament group favourites Australia with a 2-1 victory.

Despite the slow start by his girls, Donaldson was quick to point out that this team was accustomed to fighting back from difficult situations and reported that the attitude among the players was positive despite the defeat, noting that everyone is looking forward to getting back on the field against the Italians.

“This is not the first time we have had a bad result. We have been behind the eight ball a few times. we had a chat, and they understand that sometimes things don’t go the right way, but I think everybody is looking forward to the next contest,” said Donaldson, who went on to assess Friday’s opponents.

“They (Italy) had a very good result, and tactically, they were very smart in that game, so we have to be ready and make our adjustments and come out strong for that game,” he shared.