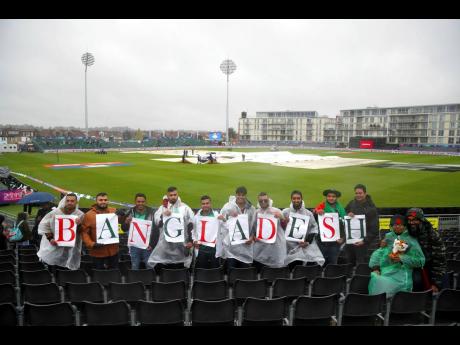 AP
Bangladesh cricket fans display their allegiance as they stand in the rain during the ICC Cricket World Cup group-stage match at the County Ground in Bristol, England, yesterday. Bangladesh were scheduled to play Sri Lanka yesterday, but the match was rained out.

Bristol already has an unwanted record as an ICC Cricket World Cup venue after rain forced a second game to be abandoned without a ball bowled.

Cricket fans and critics have questioned why the games aren’t being shifted to other days rather than teams being forced to share points.

“We put men on the moon, so why can’t we have a reserve day?” Bangladesh coach Steve Rhodes said half-jokingly.

But the ICC has dismissed the idea of having reserve days for the 45 games in the group stage, ­saying it would ­significantly extend the length of an already lengthy tournament and would be ­logistically difficult for ­broadcasters and venue managers.

ICC chief executive David Richardson issued a statement in the wake of the Sri Lanka-Bangladesh washout yesterday saying there was little organisers could do amid the “extremely unseasonable weather”.

“It would impact pitch ­preparation, team recovery and travel days, accommodation and venue availability, tournament staffing, volunteer and match officials’ availability, broadcast logistics, and, very importantly, the spectators, who, in some instances, have travelled hours to be at the game,” Richardson said. “There is also no guarantee that the reserve day would be free from rain either.”

Sri Lanka has had two games washed out – against Pakistan and Bangladesh in Bristol – and its win over Afghanistan in Cardiff was interrupted by rain.

South Africa and the Windies had to split the points after only 7.3 overs were possible because of rain in Southampton on Monday.

Richardson said some areas of England had experienced more than double the average monthly rainfall for June in the last couple of days, a vast change from last year, when only a fraction of an inch was recorded in June.

“When a match is affected by weather conditions, the venue team works closely with match officials and ground staff to ensure that we have the best possible opportunity to play cricket,” he said, “even if it is a reduced, overs game.”