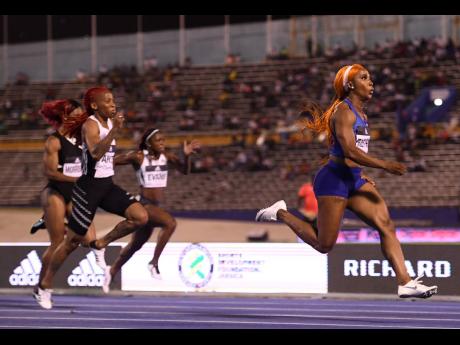 The National Senior and Junior Track and Field Championships is a mere week away. Traditionally, this is the event on which selections for the various regional and global meets, are almost solely based. The exceptions are when an athlete has World Championships winner status from the last staging or is a current IAAF Diamond League champion.

There have been some exciting developments as the prospective team members tune up at subsidiary events in order to showcase the hard work and discipline which have been at the forefront of their existence over the last few months. Live evidence regarding what is being suggested rests with the women’s sprints at both the junior and senior levels. It would be a brave pundit or reckless gambler who would make a definitive prediction on the likely outcomes.

Former 200m World champion Ato Boldon, who coaches the reigning double World junior sprint champion, Briana Williams, has stated his intention to enter his treasured charge in both sprints at the National Championships. She is touted as being in the hunt for individual 100m and 200m spots at the IAAF World Championships in Doha this September. This would mean that a clash at the upper level between the Florida-based Williams and other talented juniors would no longer be on. This would be so unless the likes of ISSA/GraceKennedy Boys and Girls’ Athletics Championships (Champs) Class Two girls’ double champion Kevona Davis and United States collegian Kiara Grant will also compete at that level. Were that to materialise, the intrigue not be missing Williams and Grant have been trading blows over the past few weeks, both taking hold of the national junior record in the 100m but having to relinquish same when it was ripped away by the other. Grant, formerly of Alpha Academy, now at Norfolk State University in the US, started the tussle five weeks ago when she lowered Veronica Campbell-Brown’s mark of 19 years ago, clocking 11.11 seconds to the Champs winner’s 11.12. Williams answered with 11.10 seconds two weeks later. This past weekend in the finals of the event at the US Collegiate Outdoor Championships (NCAA), Grant stormed back with 11.04. The winner of the event was US’s Sha’Carri Richardson in a world junior record of 10.75 seconds. Williams’ response an hour later was the Jamaican national junior record of 11.02 – amazing for the 17-year-old.

There is equal speculation with the local queens of sprinting – back-to-back 100m Olympic champion from 2008 and 2012 Shelly-Ann Fraser-Pryce and her MVP Track Club training mate, Rio Olympics double sprint champion Elaine Thompson. After an early season which was causing doubts as to whether she was up to the thrust towards Doha, Thompson sparkled at the Rome Diamond League event. She topped the field, most notably British hopeful Dina Asher-Smith, registering a 10.89-second world lead. This was after Fraser-Pryce had earned herself some plaudits with a season’s best of 10.97 seconds at an All-Comers’ Meet in Kingston. The talk from the Thompson supporters was, “Doha, get ready; here we come.” Seemingly undaunted, the acclaimed ‘Pocket Rocket,’ as announced, showed her face at the Racers Adidas Grand Prix. She managed to summon the poise and charm which have continually been special ingredients in her demeanour to post a splendid 10.88 seconds. It was acknowledged in her post-race interview, with dignified satisfaction, accompanied by a voice that demonstrated a sentiment depicting “job well done, but more to come”. Wrapped in all this is the inescapable truth that the Trials are upon us and, more important, the real test in September is three months away. The prospect of a two-way duel whets the appetite.

Finally, Foster’s Fairplay must make mention of the thrill of seeing a highly respected favourite athlete back on the track. The 2007 World youth and 2008 World junior 100m hurdles silver medallist, double Olympian Shermaine Williams, now under a new coaching regime, was at the Racers Adidas Grand Prix after a worrying absence of two years. To not steal her thunder or detract in any way from any performance that is expected for 2019, no mention will be made of her close relative with whom she shares the event. We wish them both well.